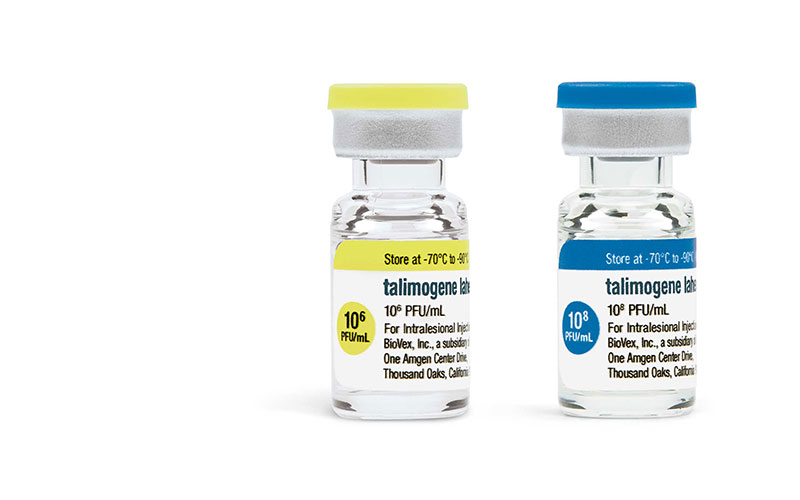 Developed by Amgen, Imlygic (talimogene laherparepvec) is the first injectable formulation of altered herpes simplex virus type 1 for the treatment of cutaneous, subcutaneous and nodal lesions in patients with melanoma recurrence after initial surgery.

Imlygic is administered through injection into the cutaneous, subcutaneous and nodal lesions that are visible or detected by ultrasound.

The US Food and Drug Administration (FDA) approved the biological license application for the genetically modified oncolytic viral therapy in October 2015.

Melanoma is a fatal form of skin cancer, developed due to unrepaired damage to skin cells caused by ultraviolet radiation that elicits gene mutations and rapid multiplication of the cells resulting in the formation of tumours.

The tumours develop in pigment-producing melanocytes in the basal epidermal layers and usually resemble moles. These are mostly black or brown in colour, but can also be pink, red, purple, blue or white. Standard treatment for the tumours is removal through surgery, which is possible only in cases of early detection.

Recurrence of melanoma is generally observed after a surgery and may lead to the formation of tumours, as well as cutaneous, subcutaneous and nodal lesions.

According to the American Cancer Society, approximately 1.35 million new cases of melanoma are diagnosed a year in the US.

Imlygic is is injected into the tumours directly, where it replicates and produces an immunostimulatory protein granulocyte macrophage colony stimulating factor (GMC-SF) that causes rupturing and killing of the tumour cells in a process known as cell lysis.

Tumour-derived antigens are released through the ruptured tumours that along with virally derived GM-CSF protein may produce an anti-tumour immune response.

The exact mechanism of action of Imlygic is unknown.

FDA approval for Imlygic was based on results from the study 005/05, which is also referred to as the OPTiM study.

"Imlygic is administered through injection into the cutaneous, subcutaneous and nodal lesions that are visible or detected by ultrasound."

The OPTiM study is a Phase III, multi-centre, open label, randomised clinical trial conducted to estimate the efficacy and safety of Imlygic compared to GM-CSF.

The study enrolled 436 patients with advanced IIIB, IIIC and IV unresected melanoma, who were randomised in a 2:1 ratio to receive either Imlygic intralesionally every two weeks or GM-CSF subcutaneously for the first 14 days of a 28-day cycle for 18 months.

The reported adverse reactions were mild or moderate in severity and were resolved within 72 hours. Cellulitis was identified as the most common Grade 3 or a higher adverse reaction.