Approved in US, Canada and Europe

Expand
Incivek (telaprevir) is a protease inhibitor used for treating Hepatitis C infections in liver patients.
Vertex Pharmaceuticals developed the drug in collaboration with the Mitsubishi Tanabe Pharma Corporation and Tibotec BVBA.
In January 2011, it was granted accelerated review by the EMA and received a positive opinion in July 2011. The drug was approved in 2013 and is being marketed under the trade name Incivo in Europe. 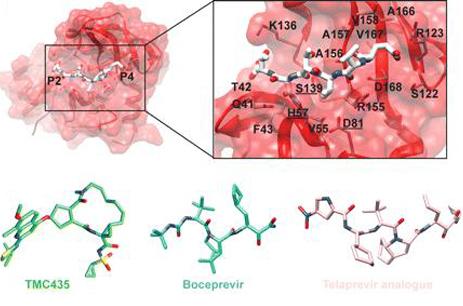 Vertex Pharmaceuticals filed a New Drug Application with the FDA in November 2010. The drug received fast track designation in January 2011 and was approved in May 2011.

A New Drug Submission was filed with the Therapeutic Product Directorate of Health Canada and given fast track designation in January 2011. Telaprevir was approved in Canada in August 2011.

Vertex filed a Marketing Application Authorisation (MAA) with the European Medicine Agency (EMA) in December 2010. In January 2011, it was granted accelerated review by the EMA and received a positive opinion in July 2011. The MAA was approved in May 2013.

The drug is being marketed under the trade name Incivo in Europe.

An antiviral drug indicated for the treatment of chronic hepatitis C (CHC) infection.

Hepatitis C is a severe virus infection which affects the liver of the patient and causes it to swell. The patients may acquire the disease through direct contact with blood or a blood transfusion from a Hepatitis patient.

The symptoms are usually not visible until the scarring of liver (liver fibrosis) occurs. Liver fibrosis is the build up of extracellular proteins which might result in cirrhosis, liver failure or portal hypertension.

Around 3.9 million people are infected with Hepatitis C in the US and 250,000 in Canada.

It targets the NS3 serine protease enzyme present in the HCV, which plays a major role in viral replication.

The drug works by binding to the NS3/4A protease and forming a reversible covalent bond. It prevents multiplication of the HCV by inhibiting the protease.

Clinical trials of the protease inhibitor

Phase I trials to observe the pharmacokinetic interactions between telaprevir, darunavir and telaprevir and fosempranavir were initiated in June 2008 and completed by October 2008. The trial enrolled around 40 patients with Hepatitic C infection.

Another Phase I trial was initiated in April 2011 to evaluate the interactions of telaprevir with etravirine and TMC278. Around 33 patients were enrolled in the study.

Phase II b trial, Prove 3, was conducted among 453 genotype 1 Hepatitis C patients. The study was initiated in February 2007 and completed in April 2010.

The Phase II C208 trial was conducted to evaluate the safety and efficacy of telaprevir administered along with either pegasys or pegintron and ribavirin in 12 hour and eight hour regimens. About 161 patients were recruited for the trial in Europe.

The Zenith Phase II trial is being conducted to evaluate the safety and efficacy of the drug when combined with pegylated-interferon and ribavirin. Around 106 patients who did not receive any prior treatment have been enrolled.

A Phase III trial was conducted in HCV infected patients to evaluate the effect of telaprevir in combination with pegasys and copegus. The trial was initiated in March 2008 and completed by May 2010.

Around 1,095 untreated patients infected with HCV were recruited for the Advance trial. Patients were administered telaprevir along with pegylated-interferon and ribavirin and then treated with pegylated-interferon and ribavirin. Results released in March 2011 showed patients had improved sustained viral cure defined as undetectable HCV in 24 weeks.

"The drug is being marketed under the trade name Incivo in Europe."

Another Phase III b trial called Optimize was initiated in November 2010 to evaluate the twice daily doses of telaprevir in patients who did not receive any prior treatment.

The EC’s approval for the drug was based on results from this study.

The randomised, open-label, multicentre Phase III study enrolled 740 naive people infected with genotype-1 HCV. The study was carried out in 135 centres worldwide. All subjects were treated with twice-daily dose of Incivo 1,125mg or a dose of Incivo 750mg every eight hours, each in combination with ribavirin (PR).

At the end of week 12, telaprevir treatment was stopped and ribavirin treatment was continued for further 12 or 36 weeks based on the patient’s viral response recorded during week four.

Sustained virological response (SVR) rates were recorded 12 weeks after the treatment was ended. The SVR 12 rate for twice daily group was 74%, while it was 73% in the eight-hour group. The former group demonstrated greater non-inferiority margin compared with the latter.

The drug has been successful in obtaining 75% of the US prescriptions for the treatment of Hepatitis C. Annual sales of the drug are expected to exceed $4bn.