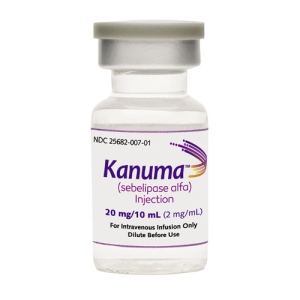 Kanuma™ (sebelipase alfa) is an enzyme replacement therapy (ERT) for the treatment of patients of all ages with lysosomal acid lipase deficiency (LAL-D). The drug was discovered and developed by Synageva BioPharma, which was acquired by Alexion Pharmaceuticals in June 2015.

Alexion received marketing authorisation approval for Kanuma from the European Commission (EC) and the US Food and Drug Administration (FDA) in September 2015 and December 2015 respectively, making it the first FDA-approved therapy for that indication.

The new drug application (NDA) for Kanuma was submitted to the Japan’s Ministry of Health, Labour and Welfare (MHLW) in May 2015, which is currently under review.

Lysosomal acid lipase deficiency is a fatal, inherited lysosomal storage disease caused by harmful mutations in the LIPA gene. The disease results in accumulation of cholesteryl esters and triglycerides in the liver, blood vessel walls and other tissues. It affects patients of all ages from infancy through adulthood.

According to an observational study, approximately 50% of children and adults with LAL-D progressed to fibrosis, cirrhosis or liver transplant in three years. The median age of onset of LAL-D is 5.8 years. It is a rare disease that affects one to two infants out of one million births.

Kanuma contains an innovative ERT, which addresses the underlying cause of LAL-D and also reduces substrate accumulation in the lysosomes of cells throughout the body.

The drug is available in 20mg/10ml dose for intravenous administration.

The US FDA approval for Kanuma was based on the results obtained from two phase III clinical trials.

The first clinical study was an open-label, multi-centre, single-arm clinical study, which was conducted on nine infants with LAL deficiency. The patients received Kanuma at 0.35mg/kg once weekly for the first two weeks and then 1mg/kg once weekly. They were compared with an untreated historical cohort of 21 patients.

"The drug was discovered and developed by Synageva BioPharma, which was acquired by Alexion Pharmaceuticals in June 2015."

The most commonly reported adverse events in clinical trials in the infants treated with Kanuma were diarrhoea, vomiting, fever, rhinitis, anaemia, cough, nasopharyngitis and urticaria.

The second clinical trial evaluated the safety and efficacy of Kanuma. It was a double-blind, multi-centre and placebo-controlled trial. The study enrolled 66 paediatric and adult patients with LAL-D. The patients were randomised to receive Kanuma at a dosage of 1mg/kg or placebo once every other week for 20 weeks in the double-blind period.

The study results demonstrated that a statistically significant improvement in percent change from baseline in LDL-c was observed in the Kanuma-treated group compared to the placebo group after a 20-week double-blind period of the trial.