Kevzara® was approved by the US FDA in May 2017.
Kevzara® is available in 150mg and 200mg doses.
The drug can be administered using subcutaneous injection.
The dosage of the drug can be reduced from 200mg to 150mg once every two weeks. 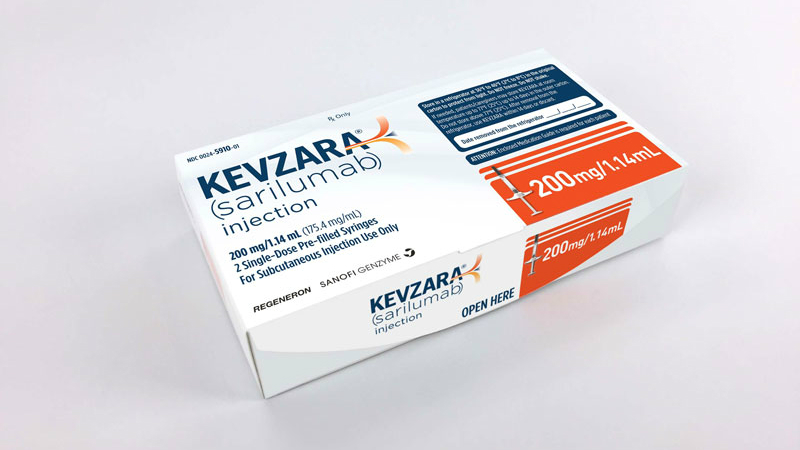 Kevzara® (sarilumab) is a human monoclonal antibody indicated for the treatment of adult patients with moderate-to-severely active rheumatoid arthritis (RA).

Kevzara® was approved by the FDA in May 2017 and by Health Canada in February 2017. The drug also received positive opinion for marketing authorisation (MA) from the Committee for Medicinal Products for Human Use (CHMP) of European Medicine Agency (EMA) in April 2017.

The European Commission (EC) granted MA for Kevzara® in combination with methotrexate (MTX) in June 2017.

RA is an inflammatory autoimmune disease that affects multiple joints in the body. It causes pain and swelling in the wrist and small joints of the hands and feet. Other symptoms include swollen joints, morning stiffness and fatigue. The disease is more common in women and people aged between 30 and 60 years.

RA is estimated to affect approximately 1.3 million in the US, 300,000 in Canada and 70 million people worldwide.

Kevzara® binds to IL-6 receptors and restrains IL-6-mediated signalling. The drug is available in 200mg and 150mg doses, which can be administered thorough subcutaneous injection.

The FDA’s approval for Kevzara® was based on results obtained from the global SARIL-RA clinical trial programme, which includes pivotal Phase III clinical trials MOBILITY and TARGET. The studies enrolled more than 2,900 adults with moderately-to-severely active RA who had inadequate response to previous treatment regimens.

In the MOBILITY study, patients were administered with Kevzara® plus MTX compared to placebo plus MTX. The study was conducted for 16, 24 and 52 weeks.

Results of the study after 16 weeks demonstrated that patients treated with Kevzara® plus MTX showed greater improvement from baseline in physical function, which was measured using the Health Assessment Questionnaire Disability Index (HAQ-DI).

Patients treated with Kevzara plus MTX showed improvement in the primary endpoint of signs and symptoms, which were measured based on the proportion of patients achieving a 20% improvement in the American College of Rheumatology Criteria after 24 weeks.

Patients treated with Kevzara® plus MTX showed less radiographic progression of structural damage, which was measured based on changes in modified Total Sharp Score after 52 weeks.

In the Phase III TARGET study, patients were treated with Kevzara® plus disease-modifying anti-rheumatic drugs (DMARD). The study was conducted for 12 and 24 weeks.

Study results after 12 weeks showed that Kevzara® plus DMARD attained a greater improvement in the primary endpoint of signs and symptoms, which were measured by the proportion of patients achieving an ACR20 response.

The results also demonstrated that patients treated with Kevzara® plus DMARD attained greater improvement in the primary endpoint of signs and symptoms, which were also measured based on the proportion of patients achieving an ACR20 response at week 24.

The EC granted approval of Kevzara® based on results from the Phase III MONARCH study, which evaluated with the safety and efficacy of Kevzara 200mg monotherapy compared to adalimumab 40mg monotherapy for 24 weeks.

Results of the study indicated that the patients administered with Kevzara 200mg showed greater reduction in disease activity as measured by change from baseline in the Disease Activity Score.

Regeneron and Sanofi Genzyme will launch Kevzara in the US market. Other medications available for the treatment of RA include Abatacept (Orencia) produced by Bristol-Myers Squibb, Xeljanz XR (tofacitinib citrate) developed by Pfizer, and Enbrel produced by Pfizer and Amgen.