Expand
Liptruzet is a combination drug made containing ezetimibe and atorvastatin.
Liptruzet is available for oral administration in doses ranging between 10/10mg/day to 10/80mg/day.
Hyperlipidaemia is caused by an excess of lipids in the bloodstream, which include cholesterol, cholesterol esters, phospholipids and triglycerides. 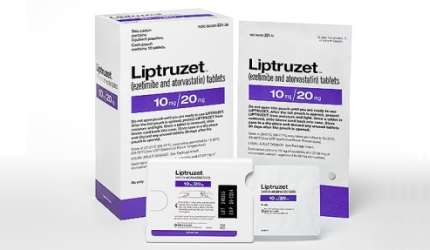 Liptruzet (ezetimibe and atorvastatin) is a combination drug indicated to reduce elevated low-density lipoprotein (LDL) cholesterol in patients suffering from hyperlipidaemia disorder. The drug was discovered and developed by Merck.

Merck received approval for Liptruzet from the US Food and Drug Administration (FDA) in May 2013 for the treatment of elevated low-density lipoprotein (LDL) cholesterol in patients with primary or mixed hyperlipidaemia.

"Merck received approval for Liptruzet from the US Food and Drug Administration (FDA) in May 2013."

Hyperlipidaemia is a genetic disorder that features abnormally elevated levels of lipids in the blood. The lipids include cholesterol, cholesterol esters, phospholipids and triglycerides. The disease can lead to atherosclerosis and cardiovascular disease, including coronary heart disease.

More than 71 million adult people in the US have high LDL cholesterol, according to Centers for Disease Control and Prevention estimates.

Liptruzet is a combination of two lipid-reducing drugs: ezetimibe and atorvastatin.

The drug is available for oral administration in doses ranging between 10/10mg/day to 10/80mg/day.

The FDA approval for Liptruzet was based on data collected from two six-week and one 12-week Phase III clinical studies.

"Hyperlipidaemia is a genetic disorder that features abnormally elevated levels of lipids in the blood."

The results of the study demonstrated that the patients treated with Liptruzet 10/40mg shed LDL cholesterol by an average of 27% when compared to 11% in atorvastatin-administered patients. About 74% of the patients in Liptruzet 10/40mg arm achieved LDL cholesterol of less than 70mg/dL, while just 32% of participants achieved the same in the atorvastatin arm.

Merck’s second six-week Phase III trial was conducted on 184 moderately high-risk patients taking atorvastatin 20mg. All the patients had LDL cholesterol at more than 100mg/dL. The patients were randomised to receive either Liptruzet 10/20mg co-administered as ezetimibe and atorvastatin, or atorvastatin 40mg.

Juxtapid (lomitapide) is developed and manufactured by Aegerion Pharmaceuticals for the treatment of patients with homozygous familial hypercholesterolemia (HoFH).

The adverse effects found with the use of Liptruzet during the clinical studies included increased ALT (alanine transaminase), increased AST (aspartate aminotransferase) and musculoskeletal pain.

Marketing Liptruzet in the US

Merck holds the marketing rights of Liptruzet in the US. The drug faces competition from Juxtapid, developed by Aegerion Pharmaceuticals.