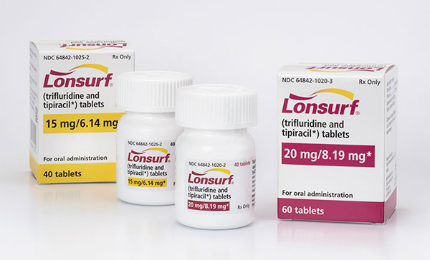 Lonsurf (trifluridine and tipiracil) is an oral anti-cancer drug indicated for the treatment of patients with advanced metastatic colorectal cancer (mCRC) that are unresponsive to other therapies such as chemotherapy and biological therapy.

The drug is manufactured by Taiho Oncology, a subsidiary of Taiho Pharmaceutical (Japan).

Lonsurf (trifluridine and tipiracil) was approved by US Food and Drug Administration (FDA) for the treatment of advanced mCRC in September 2014. It is the company’s first FDA approved drug.

The FDA granted fast track designation for the drug in September 2014 and accepted the new drug application (NDA) in February 2015.

The drug was also approved in Japan for the treatment of recurrent colorectal cancer in March 2014.

"Lonsurf is composed of two active components which are trifluridine, a nucleoside metabolic inhibitor, and tipiracil, a thymidine phosphorylase inhibitor."

Colorectal cancer affects the parts of large intestine such as the colon and rectum. It often begins as a small growth, called polyp, which eventually turns cancerous. Identifying and removing polyps could prevent colorectal cancer.

Colorectal cancer, according to American Cancer Society, is the third most common type of cancer and is the second leading cause of cancer-related deaths in the US.

In 2014, an estimated 136,830 cases of either colon or rectum cancer were diagnosed of which, the cancer had spread to another part of the body in more than 20% cases.

Lonsurf is composed of two active components which are trifluridine, a nucleoside metabolic inhibitor, and tipiracil, a thymidine phosphorylase inhibitor, at a molar ratio of 1:0.5.

Tipiracil, which is a thymidine phosphorylase inhibitor, curbs the metabolism of trifluridine and increases its exposure. Once trifluridine enters the cancer cells, it is incorporated into the DNA, interferes with its synthesis, and reduces cell proliferation.

Lonsurf is available in the form of white, biconvex, round, film-coated tablets in two different strengths and is meant for oral administration only.

Stivarga (Regorafenib) is an oral multikinase inhibitor developed by Bayer HealthCare for the treatment of metastatic colorectal cancer (mCRC).

The FDA approval of Lonsurf was based on results from a Phase III clinical trial, known as Recourse, which was conducted to determine the safety and efficacy of the drug.

Recourse is global, randomised, double-blind study, which enrolled 800 patients that had been treated for mCRC with at least two lines of standard chemotherapy. Key eligibility also included absence of brain metastasis and ascites.

During the study, subjects were randomised in 2:1 ratio and treated with either Lonsurf along with best supportive care (BSC), or placebo with BSC.

Subjects in one arm received 35mg/m² Lonsurf, while those in the other received a matching placebo orally twice a day after meals until their disease progressed or side effects became intolerable.

The primary endpoint of the study was overall survival (OS), while the secondary endpoint was progression-free survival (PFS). Results showed there was statistically significant improvement in both OS and PFS in patients treated with Lonsurf and BSC, compared to those treated with placebo and BSC. The drug reduced the risk of death by 32% compared to a placebo.