Expand
Lucentis (ranibizumab) is a monoclonal antibody indicated for the treatment of diabetic macular edema.
Diabetic macular edema occurs when the damaged blood vessels from diabetic retinopathy leak fluid and lipids onto the macula.
The use of Lucentis 0.5mg for treatment of wet AMD was approved by the US FDA in June 2006. Image courtesy of Novartis.
DME can cause blurring of central vision or complete loss of eyesight. Image courtesy of Ske. 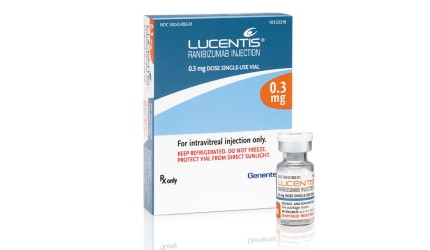 Lucentis (ranibizumab) is a monoclonal antibody indicated for the treatment of diabetic macular edema (DME). The drug is developed by Genentech, a subsidiary of Roche Group.

"Lucentis (ranibizumab) is a monoclonal antibody indicated for the treatment of diabetic macular edema."

Diabetic macular edema occurs when the damaged blood vessels from diabetic retinopathy leak fluid and lipids onto the macula. Macula is a vital part of the retina, which is responsible for central vision. DME may cause blurring of central vision or complete loss of eyesight. The onset of the disease is painless, so it may go unidentified by the patient until it manifests with complete or partial loss of vision.

It is estimated that the disease affects about 560,000 people in the US. A study by Wisconsin Epidemiologic observed that over a 10-year period, more than 19% of people with diabetes were diagnosed with diabetic macular oedema.

The World Health Organisation (WHO) estimates that there are more than 150 million diabetics worldwide. All diabetics are prone to the development of diabetic retinopathy.

The drug is administered intravenously.

Genentech conducted phase I and II clinical trials on Lucentis between January 2008 and October 2010. It was an open label, randomised, parallel assessment which was initiated on 10 DME patients to establish the safety and efficacy of Lucentis. The primary outcome measure of the study was finding the percentage of change in macular edema measured by retinal thickness by optical coherence tomography (OCT). The secondary outcome measures included finding the change in Best Corrected Visual Acuity (BCVA) and percentage of patients gaining three or more lines of vision.

"The US Food and Drug Administration (FDA) approved Lucentis for the treatment of diabetic macular edema in August 2012."

The approval for Lucentis was based on two phase III clinical trials named RIDE and RISE. Genentech conducted the two sham-treatment controlled trials for 24 months. They were identically designed, double-blind, double-masked and parallel trials. The clinical studies enrolled 759 patients, who were randomised into three groups to receive monthly treatment with 0.3mg Lucentis, 0.5mg Lucentis or a sham injection.

The primary outcomes of the studies were evaluated after 24 months. The results of the study revealed that Lucentis improved clinical outcomes including substantial visual gain for many DME patients. The patients who were administered with Lucentis 0.3mg experienced significant early vision on the seventh day and sustained improvements in vision after 24 months. Most of the patients who were administered with Lucentis were able to read 15 letters on the eye chart at 24 months.

The pooled safety analysis of Lucentis in the RIDE and RISE studies at 24 months showed that the ocular safety of patients who used the drug for DME treatment was generally consistent. The same treatment was continued for 36 months after encouraging improvements were observed in patients treated with Lucentis for 24 months.

Lucentis is the first FDA-approved DME drug. Genentech holds the marketing rights of the drug in the United States. Novartis was licensed to sell the drug elsewhere under the brand name Lucentis. The other drug approved for the same indication is Iluvien, which was developed by Alimera Sciences.