Approved in the US, Europe, Canada, and Australia

Expand
Multiple sclerosis (MS) is caused when myelin insulation gets damaged.
Macrophages in the area of the lesion in an MS patient.
The damaged MS lesion. 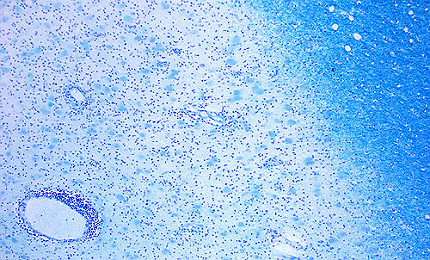 Tecfidera (BG-12/Dimethyl Fumarate) is a first-line oral treatment indicated for patients with relapsing-remitting multiple sclerosis (RRMS). The drug was developed by Biogen Idec. The drug received fast-track designation from the US Food and Drug Administration (FDA) in 2008.

Biogen filed a new drug application (NDA) with the FDA in February 2012. The FDA approved Tecfidera to reduce RRMS disease activity, which includes relapsing and development of brain lesions in March 2013. The drug can also reduce disability progression.

The Committee for Medicinal Products for Human Use (CHMP) in the European Union (EU) approved the marketing authorisation of Tecfidera in March 2013. The drug was approved by European Commission (EC) as a first-line oral treatment for people with RRMS in February 2014.

Multiple sclerosis (MS) is a chronic disease caused when the myelin insulation which covers the nerve fibres (neurons) in the central nervous system gets damaged.

Sensation, movement and bodily functions are affected in MS patients. The disease has four internationally recognised forms and RRMS is one of them.

BG-12, the active component of Tecfidera, belongs to a fumaric acid esters class of drugs. The drug provides treatment of RRMS. The mechanism of action of the drug is not understood completely, however, clinical trials on BG-12 suggest that the drug works by suppressing the inflammatory response and provides protection against nerve cell death. The drug prevents attack on CNS by the immune system and it also protects neurons from the attack. The common side effects of the drug are flushing and gastrointestinal (GI) events: diarrhoea, nausea and abdominal pain.

Tecfidera is available in the form of hard-gelatine delayed-release capsules for oral administration. Each capsule contains 120mg or 240mg of dimethyl fumarate.

Biogen conducted Phase I clinical trials on BG-12 between February and October 2009. The study enrolled 48 patients with RRMS in study centres across Germany and the UK. The study results established the pharmacokinetic (PK) profile of BG-12.

"Tecfidera is approved in the US, Europe, Canada and Australia."

The company initiated open-label and multicentre Phase II clinical trials (EXPLORE study) on BG-12 in May 2010. The results of the study were out in 2011. The study enrolled 100 patients across 21 study centres in the US.

Biogen initiated a randomised, double-blind, placebo-controlled and multicentre first Phase III clinical trial on BG-12 known as the DEFINE (determination of the efficacy and safety of oral fumarate in relapsing-remitting MS) study. The study was conducted between January 2007 and February 2011. It was conducted on more than 1,200 patients across 169 study locations around the world. The patients were administered with a 240mg dose of BG-12 two or three times a day.

The DEFINE study results were announced in April 2011. The results showed that BG-12 met both primary and secondary endpoints of the study. BG-12 demonstrated a statistically significant reduction in the RRMS patients who relapsed at two years compared to the placebo. The study results also showed a favourable safety and tolerability profile of BG-12.

Biogen initiated the second Phase III clinical trials CONFIRM on BG-12 in June 2007. It is a randomised, placebo-controlled, active reference and multicentre study. The study enrolled 1,232 patients with RRMS across 206 international study locations.

The study tested the drug in comparison with a placebo and Copaxone (glatiramer acetate), which is an active comparator produced by Teva Pharmaceuticals. The FDA and EC approvals for Tecfidera were based on the outcomes of the DEFINE and CONFIRM studies in phase III.

The primary outcome measure of the study was to determine whether BG-12 when compared to placebo was effective in reducing the relapses inside a period of two years.

The secondary outcome measure included finding the safety and tolerability of BG-12 and also finding whether the drug decreased the brain lesions and slowed down the progression.

The results of the study were announced in April 2012. Patients were given 240mg of BG-12, either twice a day (BID) or three times a day (TID), and compared with a placebo for two years. The study showed that BG-12 reduced annualised relapse rate (ARR) by 44% for BID and by 51% for TID.

Developed by GW Pharmaceuticals, Sativex is a whole plant medicinal cannabis extract indicated for the relief of multiple sclerosis (MS) symptoms and the treatment of severe neuropathic-related cancer pain.

Developed by Acorda Therapeutics and manufactured by Elan Corporation, fampridine-SR (now referred to as AMPYRA) is a selective neuronal potassium channel blocker under investigation for the treatment of multiple sclerosis (MS) and spinal cord injury (SCI).