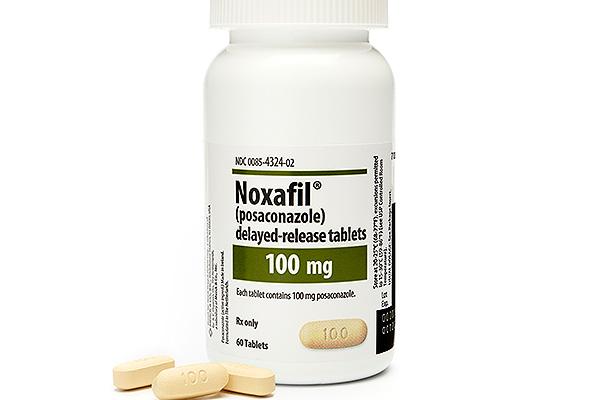 Noxafil (posaconazole) is a triazole antifungal agent indicated for treatment of the prophylaxis of invasive Aspergillus and Candida infections. The drug was originally developed by Schering-Plough, which merged with Merck in 2009.

Merck also obtained positive opinion from the Committee for Medicinal Products for Human Use (CHMP) of the European Medicines Agency (EMA), recommending approval of Noxafil investigational tablet across Europe in February 2014.

A new intravenous cephalosporin antibiotic indicated for the treatment of serious skin infections.

The fungal infections are very common and can be observed in most immunocompromised patients, especially leukaemia patients. Candida and Aspergillus species are the most common fungal pathogens responsible for infection.

Noxafil contains an active triazole antifungal drug substance called posaconazole, which stops the growth of fungi by blocking the synthesis of ergosterol, a key factor of the fungal cell membrane. The drug also inhibits the accumulation of methylated sterol precursors.

Noxafil is available for intravenous use as well as for oral administration and is available in 100mg delayed-release tablets, 40mg/ml oral suspension, and 18mg/m injection forms.

The FDA approved Noxafil intravenous (IV) formulation in March 2014 for treatment of the prophylaxis of invasive Aspergillus and Candida infections in high-risk patients. Patients were administered with Noxafil loading dose of 300mg (one 300mg vial) twice a day on the first day of NOXAFIL therapy, and then 300mg (one 300mg vial) once a day thereafter.

"Diarrhoea, fever and nausea were the most common adverse reactions found in the patient group of Noxafil delayed-release tablets."

FDA approval for Noxafil 100mg tablets was based on a non-comparative, multicenter pharmacokinetic clinical trial that evaluated the safety and tolerability of Noxafil delayed-release tablets in patients with acute myeloid leukaemia (AML) or myelodysplastic syndrome (MDS).

Diarrhoea, fever and nausea were the most common adverse reactions found in the patient group of Noxafil delayed-release tablets.

Results from both clinical studies demonstrated that patients who were treated with posaconazole showed substantially fewer breakthrough infections caused by Aspergillus species when compared to patients receiving fluconazole or itraconazole.

Headquartered at Whitehouse Station in New Jersey, US, Merck is a leading healthcare company engaged in manufacturing medicines, vaccines, biologic therapies, and consumer care and animal health products. It has operations in more than 140 countries worldwide.

Merck holds all rights to develop, produce, commercialise and market Noxafil in the world. The company plans to launch Noxafil injection in the US market in April 2014.