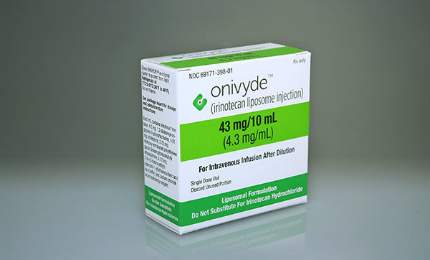 The drug was developed by Merrimack Pharmaceuticals in collaboration with Baxalta, a subsidiary of Baxter.

The drug’s development, manufacturing and commercialisation rights in Asia and Europe were licensed by PharmaEngine to Merrimack in September 2014.

Merrimack signed an exclusive license and collaboration agreement with Baxter for MM-398 outside of the US and Taiwan, while PharmeEngine continues to hold commercialisation rights within Taiwan.

Merrimack submitted a new drug application (NDA) for Onivyde to US Food and Drug Administration (FDA) in April 2015.

The FDA approved Onivyde for the treatment of patients with metastatic adenocarcinoma of the pancreas disease that has progressed following gemcitabine-based therapy, in October 2015.

Onivyde is the only combination drug containing fluorouracil and leucovorin that was approved by the FDA for the treatment of patients with metastatic pancreatic cancer.

PharmaEngine filed an NDA for MM-398 with the Taiwan FDA in May 2015 and obtained drug approval for the treatment of metastatic pancreatic cancer in October.

Baxalta’s marketing authorisation application (MAA) for Onivyde for the treatment of metastatic pancreatic cancer was also accepted for review by the European Medicines Agency (EMA) in May 2015.

"Onivyde is the only combination drug containing fluorouracil and leucovorin that was approved by the FDA for the treatment of patients with metastatic pancreatic cancer."

Pancreatic cancer is the fourth most leading cause of cancer related deaths in the US. The disease occurs when cells in the pancreas grow uncontrollably from a malignant tumour.

Exocrine tumours, the most common type of pancreatic cancer, account for approximately 95% of cases.

Onivyde contains a topoisomerase inhibitor called irinotecan liposome. The drug contains SN-38, an active metabolite of irinotecan that binds reversibly to the topoisomerase 1-DNA complex and prevents re-ligation of the single strand breaks.

The drug is available in 43mg/10ml dose for intravenous administration.

Abraxane for the Treatment of Late Stage Pancreatic Cancer, US

Abraxane (albumin-bound paclitaxel for injectable suspension) is an intravenous injection indicated for the treatment of metastatic pancreatic cancer.

FDA approval for Onivyde was based on results from a Phase III clinical trial called NAPOLI-1. It was a randomised, open-label clinical study that enrolled 417 patients with metastatic adenocarcinoma of the pancreas, who received prior to the trial gemcitabine-based therapy.

Patients were enrolled from 76 sites across North America, South America, Europe, Asia and Oceania. The study evaluated the Onivyde combination regimen compared to a control arm of 5-FU and leucovorin.

The most common adverse reactions found in Onivyde administered patients during the study were diarrhoea, fatigue or asthenia, vomiting, nausea, decreased appetite, stomatitis and pyrexia.