Mantle cell lymphoma (MCL) is a form of blood cancer where the white blood cells grow and multiply uncontrollably. Image courtesy of Nephron.
Revlimid contains lenalidomide that delays the growth of tumour cells in the immune system.
Revlimid is a derivative of thalidomide. 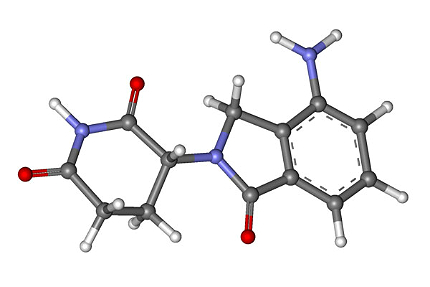 Revlimid (lenalidomide) oral capsules are indicated for the treatment of Mantle Cell Lymphoma (MCL). The drug was discovered and developed by Celgene Corporation.

The US Food and Drug Administration (FDA) gave approval for revlimid in June 2013 to treat MCL patients whose disease has relapsed or progressed after bortezomib therapy.

Celgene had received FDA approval for revlimid for the treatment of multiple myeloma indication in June 2006.

Mantle cell lymphoma is the most common blood cancer belonging to the non-Hodgkin’s lymphomas. The disease occurs due to the uncontrollable growth of lymphocytes, a type of white blood cell in the immune system.

The cancerous lymphocytes originally come from lymph nodes and spread to the gastrointestinal tract and bone marrow. The disease is very often diagnosed at a late stage due to its slow growing nature.

The disease affects about 16,000 new people every year in the US.

Revlimid contains lenalidomide, which is a derivative of thalidomide. The drug has three properties, which include immunomodulatory, antiangiogenic and antineoplastic.

It targets the disease in three ways – direct anti-tumour effect, restraining the microenvironment support for tumour cells and an immunomodulatory role. The drug also works by delaying the tumour cell growth.

The drug is available in 25mg capsule form for oral administration.

"Celgene had received FDA approval for revlimid for the treatment of multiple myeloma indication in June 2006."

The FDA approval for Revlimid to treat MCL was based on a Phase II open label clinical trial known as the MCL-001 study. The study was conducted between October 2008 and June 2013. It was a multicentre, single arm clinical study.

The study enrolled 134 MCL patients who had previously received treatment with rituximab, cyclophosphamide, anthracycline (or mitoxantrone) and bortezomib alone or in combination.

The overall response rate (ORR) in the patients treated with Revlimid was 26%, while the median duration of response (DOR) was 16.6 months.

Celgene Corporation is a leading biopharmaceutical company in the world with its headquarters located at Summit in New Jersey, US.

"Mantle cell lymphoma is the most common blood cancer belonging to the non-Hodgkin’s lymphomas."

The company is engaged in the discovery, production and marketing of novel therapies for the treatment of cancer and inflammatory diseases through gene and protein regulation.

Celgene made $3.8bn worth of revenues in the US market by selling Revlimid for multiple myeloma indication in 2012. The annual revenues of Revlimid are expected increase enormously with the addition of treatment for two more indications.

The drug, however, faces severe competition from a similar medication, Velcade (bortezomib), which is manufactured by Takeda/Millennium and Johnson & Johnson.

Pomalyst (pomalidomide) is another multiple myeloma drug produced by Celgene.

Adcetris (Brentuximab) is an investigational drug being developed by Seattle Genetics along with Millenium Pharmaceuticals, a wholly owned subsidiary of Takeda Pharmaceutical, for the treatment of relapsed or refractory Hodgkin’s lymphoma and anaplastic large cell lymphoma (ALCL). It is an antibody-drug conjugate.

Axitinib is an investigational drug being developed by Pfizer for treating advanced renal cell carcinoma (ARCC) and hepatocellular carcinoma.