Approved in US and Europe

Expand
RiaSTAP is a lyophilised fibrinogen concentrate targeted at congenital fibrinogen deficiency (CFD).
CFD is characterised by the inability of the body to form blood clots. Image courtesy of Persian Poet Gal.
Fibrinogen is converted into fibrin during clot formation. Image courtesy of amolinski. 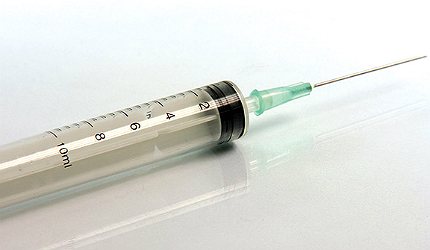 RiaSTAP is already approved and marketed in Europe as Haemocomplettan. It was approved in the US by the Food and Drug Administration (FDA) in January 2009. It is the only FDA-approved treatment available for CFD. It was awarded orphan drug status in March 2008.

"Mutation of one of the genes responsible for production of fibrinogen is the main cause of the deficiency."

CFD is a rare hereditary condition characterised by the inability of the body to form blood clots. It is caused by lack of fibrinogen (clotting factor one) which is required to form clots. Fibrinogen is produced in the liver and is responsible for platelet aggregation.

Mutation of one of the genes responsible for production of fibrinogen is the main cause of the deficiency. People affected with CFD experience uncontrolled bleeding after surgery or trauma.

An estimated 150 to 300 patients in the US suffer from CFD. Treatments for CFD include factor replacement therapy which increases the fibrinogen levels in the body.

Coagulation processes include the conversion of fibrinogen into fibrin. Cross-linking of fibrin polymers occurs in the presence of factor XIIIa, which provides strength and stability to the blood clot.

CSL collects the plasma required for production of RiaSTAP through its plasma centres located across the US and Europe. The donors are subjected to rigorous health checks to qualify for donation. The collected plasma then undergoes several serological tests and virus inactivation to ensure safety.

A Phase I multicentre, multinational, uncontrolled pharmacokinetic trial was conducted on six patients with CFD in Europe. It was carried out between April and November 1993.

"CSL collects the plasma required for production of RiaSTAP through its plasma centres located across the US and Europe."

Haemocomplettan was tested in 80 patients in a Phase II study. The trial commenced in June 2009 and was completed in April 2010. It studied the safety and efficacy of hemocomplettan in treating acute bleeding episodes during aortic surgery.

Approval of RiaSTAP in the US was based on a pivotal open-label uncontrolled Phase II pharmacokinetic and safety study. The one year study started in July 2007 and recruited 15 patients. It was completed in May 2008 with maximum clot firmness (MCF), a measure of structural integrity of a clot, as the primary endpoint. RiaSTAP was found effective in improving clot firmness.

An open label Phase IV multinational, multicentre study is currently recruiting up to 33 patients. It aims to study the efficacy of RiaSTAP in improving coagulation following bypass surgery. It commenced in December 2010 and will be completed December 2012.

CSL is also conducting a Phase III study to test the safety and efficacy of human fibrinogen in patients with CFD. The study started in October 2009 and will recruit 23 patients. It is expected to be completed in September 2014.

Another Phase III trial is being conducted to test the safety and efficacy of human fibrinogen administered during liver transplantation. Around 132 patients will be recruited for the study which started in March 2012. Completion of the study is scheduled for September 2014.

ZEro PLASma trial is a Phase III study aiming to replace use of fresh frozen plasma with coagulation therapies based on fibrinogen and prothrombin complexes. The study commenced in November 2011 and will recruit 120 patients. It will be completed by December 2012.

A Phase II study comparing RiaSTAP with conventional transfusion in heart valve replacement surgery is currently ongoing. The study which commenced in January 2011 will recruit 60 patients and is expected to be completed by November 2012.

Another Phase II trial will compare the safety and efficacy of octafibrin with RiaSTAP in 18 patients. The study is expected to commence in October 2012 with completion scheduled for October 2013.

Tavneos (avacopan) for the Treatment of ANCA-Associated Vasculitis

Scemblix (asciminib) for the Treatment of Chronic Myeloid Leukaemia
Topics in this article: