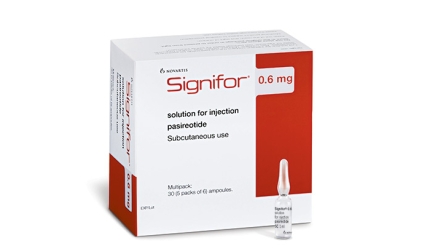 Signifor (SOM230 / Pasireotide) is a somatostatin analogue indicated for the treatment of patients with Cushing’s disease for whom surgery has failed. The drug is developed and manufactured by Novartis.

In April 2012, Signifor was approved by the European Commission (EC) for treating adult patients with Cushing’s disease.

“Signifor is a somatostatin analogue indicated for the treatment of patients with Cushing’s disease for whom surgery has failed.”

Cushing disease is an endocrine disorder caused by a tumour on the pituitary gland. It is a serious condition where the pituitary gland releases excessive adrenocorticotropic hormone (ACTH). It occurs due to excessive urinary-free cortisol (UFC) levels in the body, and affects adults aged between 20 and 50 years. Women are three times more likely to be affected than men.

The disease is estimated to affect about 10 to 15 of every million people each year.

Signifor contains a somatostatin analogue. The drug works by activating somatostatin receptors in the pituitary adenoma, which results in inhibiting the excessive ACTH and lowering urinary-free cortisol (UFC) levels. The drug is available as a 0.6mg injection.

Novartis conducted phase I clinical trials on Signifor between July 2008 and April 2009. It was an open label, interventional and single-group assignment which evaluated the safety and efficacy of Signifor. The study enrolled 34 patients. The primary outcome measure was determining the pharmacokinetic profile of a Signifor single dose injection. The secondary outcome measure was determining safety after a single Signifor injection.

“The drug works by activating somatostatin receptors in the pituitary adenoma, which results in inhibiting the excessive ACTH and lowering urinary-free cortisol levels.”

The EU approval for Signifor was based on phase III clinical trial known as Pasport-Cushings. It was a prospective, randomised, double-blind study, conducted in 68 sites across 18 countries. The 12-month study evaluated the efficacy and safety of Signifor in 162 patients who were administered with a 900µg and 600µg injection twice a day.

Under development by NeuroSearch, a Danish pharmaceutical company, tesofensine is a novel treatment for obesity.

The study’s results, announced in March 2012, showed that Signifor 900µg and 600µg drug doses normalised the mean UFC levels in the body by 26.3% and 14.6% respectively. The patients met the primary endpoint, normalisation of UFC, after six months. The study also demonstrated that the median reduction of mean UFC was 47.9% in both dose groups of the drug. The results further showed that Signifor reduced the manifestations of Cushing’s disease, which included the blood pressure, total cholesterol, as well as weight and body mass index in twelve months. The most commonly reported adverse events for Signifor included nausea, hyperglycemia, diarrhea, diabetes mellitus, injection site reactions, abdominal pain and fatigue.

Novartis initiated another phase III clinical trial on Signifor in November 2011. It is a randomised, double-blind, multicenter, phase III study which evaluates the efficacy and safety of Signifor in two dosing regimens of long acting release (LAR). The study enrolled 148 patients.

Signifor is the only pituitary-targeting medicine available on the market for Cushing’s disease. The drug is expected to capture a $90.8m market by 2019. A medication approved for the same indication is Korlym (mifepristone) which was developed by Corcept Therapeutics.