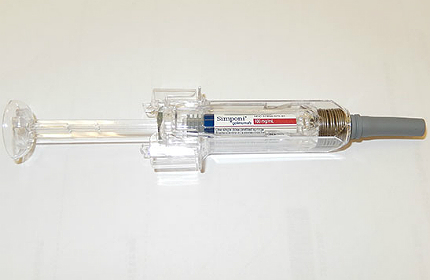 Simponi (golimumab) is a subcutaneous injection for the treatment of adult patients living with ulcerative colitis (UC). The drug was discovered and developed by Janssen Biotech.

In May 2013, Janssen Biotech received the US Food and Drug Administration (FDA) approval for Simponi for the treatment of moderately to severely active ulcerative colitis (UC) in adult patients, who have demonstrated corticosteroid dependence or who have had an inadequate response to or failed to tolerate oral aminosalicylates, oral corticosteroids, azathioprine or 6-mercaptopurine.

Janssen Biologics B.V. submitted an application for marketing approval of Simponi for the treatment of adult patients with moderately to severely active ulcerative colitis (UC) who have had an inadequate response to conventional therapy to the European Medicines Agency (EMA) in July 2012.

Ulcerative colitis (UC) is an inflammatory bowel disease (IBD) that affects the large intestine. It is marked by inflammation and ulceration of the colonic mucosa, or innermost lining. The disease often leads to bloody stools, severe diarrhoea and abdominal pain.

The disease is estimated to affect about 700,000 individuals in the US and about 1.1 million people in the European Union.

Mechanism of action for Simponi (golimumab)

Simponi is a human monoclonal antibody. The overproduction of TNF-alpha in the body can cause inflammation and damage to bones, cartilage and tissue. The drug targets and neutralises excess TNF-alpha protein in the body.

The drug is available in injection form, which is administered subcutaneously.

All trial patients had failed to respond to or tolerate treatment with 6-mercaptopurine (6-MP), azathioprine (AZA), corticosteroids and/or 5-aminosalicylate (5-ASA), or were corticosteroid dependent.

Study participants were naïve to treatment with TNF inhibitors and had a baseline Mayo score between six and 12 and an endoscopic subscore of two or more. The Mayo score is a 12-point clinical assessment and colonoscopy-based measure of disease activity, which assesses improvement in symptoms based on rectal bleeding, endoscopic findings, stool frequency and a physician’s global assessment.

The induction trial (PURSUIT-SC) had an adaptive design with a Phase II dose-finding portion followed by a Phase III dose-confirming component. The primary endpoint was clinical response at week six. Secondary endpoints at week six included clinical remission and mucosal healing (improvement of endoscopic appearance of mucosa) – Mayo endoscopy score of zero or one. Overall, 1,065 patients were treated in the study; 774 of these patients were randomised into the Phase III component of the study.

Patients responding to induction treatment with SIMPONI were eligible to be randomised in the Phase III PURSUIT-Maintenance study. The primary endpoint of the study was maintenance of clinical response through week 54, and secondary endpoints included clinical remission and mucosal healing (improvement of endoscopic appearance of mucosa) – Mayo endoscopy score of zero or one – at both weeks 30 and 54.

The safety results of SIMPONI observed in the PURSUIT studies were consistent with the known safety profile of SIMPONI in labelled rheumatologic indications.

Simponi is the first subcutaneous anti-tumour necrosis factor (TNF)-alpha therapy approved by the FDA to induce and maintain clinical response and improve endoscopic appearance of the mucosa during induction in patients with ulcerative colitis.

"The drug targets and neutralises excess TNF-alpha protein in the body."

Janssen Biotech holds all the commercial and marketing rights of Simponi for UC indication in the US. Janssen pharmaceutical companies market SIMPONI in Canada, Central and South America, the Middle East, Africa and Asia Pacific.

In Japan, Indonesia and Taiwan, Janssen Biotech licenses distribution rights to SIMPONI to Mitsubishi Tanabe Pharma Corporation and has retained co-marketing rights in those countries.

Other medications available for the treatment of the same indication include Sulfasalazine (Azulfidine) developed by Pfizer, Uceris (Budesonide) developed by Santarus and Cosmo Technologies, and Remicade (Infliximab) discovered and developed by Janssen Biotech.

Uceris (budesonide) is glucocorticoid receptor that is indicated for the treatment of ulcerative colitis.

Linzess (linaclotide) is a guanylate cyclase-C (GC-C) agonist indicated for the treatment of irritable bowel syndrome with constipation (IBS-C) and chronic idiopathic constipation (CIC) in adult men and women.