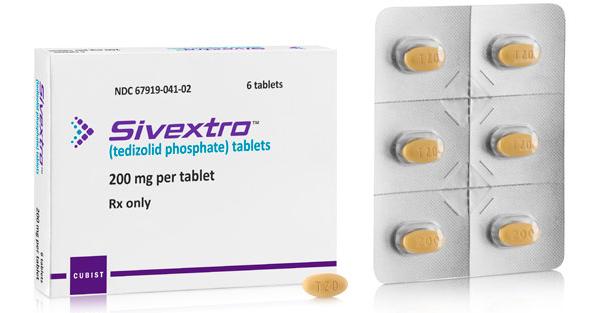 Sivextro (tedizolid phosphate) is an oxazolidinone class antibacterial drug approved by the US Food and Drug Administration (FDA) in June 2014 for the treatment of adult patients infected with acute bacterial skin and skin structure infections (ABSSSI) caused by susceptible Gram-positive bacteria. These include methicillin-resistant Staphylococcus aureus (MRSA).

ABSSSI is also known as complicated skin and soft tissue infection (cSSTI) in Europe. It is a bacterial infection of skin and deeper tissues.

The infection may be either complicated or uncomplicated and includes infected ulcers, burns, and major abscesses. Uncomplicated infections caused by Staphylococcus aureus and Streptococcus pyogenes include simple abscesses, lesions, cellulitis, and furuncles.

MRSA is an infection caused by bacteria resistant to antibiotics commonly used to treat infections. The US Center for Disease Control and Prevention (CDC) categorised MRSA as one of the serious public health threats.

It is estimated that about 80,000 cases of severe MRSA infections are recorded every year in the US, resulting in more than 11,000 MRSA-related deaths. In Europe, more than four million people are affected with healthcare-acquired infections (HAI) every year, resulting in 37,000 deaths caused due to MRSA.

"The antibacterial activity of tedizolid inhibits the synthesis of bacterial protein."

The active component in Sivextro, tedizolid phosphate, belongs to the oxazolidinone class of antibacterial drugs. The antibacterial activity of tedizolid inhibits synthesis of bacterial protein, which makes the drug bacteriostatic against multiple pathogens such as enterococci, staphylococci, and streptococci.

Cubist Pharmaceuticals evaluated the safety and efficacy of Sivextro in two phase three clinical studies. The randomised, multicentre, multinational, double-blind, non-inferiority trials enrolled a total of 1,315 adult patients with ABSSSI. Patients were divided into two groups; one was treated with 200mg of sivextro daily for six daysand the other with 600mg of linezolid every 12 hours for ten days.

In trial one, 323 ABSSSI patients were given Sicextro oral therapy and 326 patients were treated with linezoid. The age of patients enrolled ranged between 18 and 86, the average age being 43 years. Types of ABSSSI included were cellulitis, wound infection, and major cutaneous abscess.

In trial II, 332 ABSSSI patients were given Sicextro and 334 patients were treated with linezoid. The age range of the patients involved was between 17 and 86, the average age being 46 years. Types of ABSSSI included were the same as those in trial one.

The most adverse reactions found in the patients treated with Sivextro included diarrhoea, vomiting and nausea.

Sivextro was reviewed by the FDA under qualified infectious disease product (QIDP) designation, which made the drug qualify for an additional five years of marketing exclusivity in addition to the time provided by the Food, Drug and Cosmetic Act.

Other medications available in the market for the same indication include Dalvance (dalbavancin) developed by Durata Therapeutics.