Stivarga (regorafenib) is an oral multikinase inhibitor indicated for the treatment of patients with metastatic colorectal cancer (mCRC).
Stivarga is promoted in the US by Bayer and Onyx Pharmaceuticals.
Stivarga is available in a 40mg oral dose. 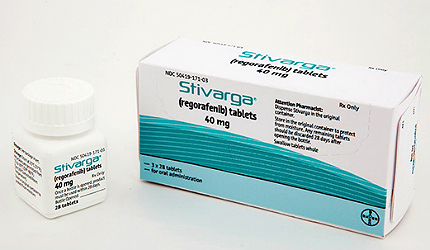 Stivarga (Regorafenib) is an oral multikinase inhibitor developed by Bayer HealthCare for the treatment of metastatic colorectal cancer (mCRC).

The US Food and Drug Administration (FDA) approved Stivarga in September 2012 for the treatment of mCRC patients.

An EU marketing application for Stivarga was submitted in May 2012, which was approved by the European Commission (EC) in August 2013. An additional approval in the EU for the treatment of gastrointestinal stromal tumours (GIST) was received in July 2014.

The Japanese Ministry of Health, Labor and Welfare (MHLW) approved Stivarga for the treatment of mCRC patients in March 2013, following a new drug application (NDA) submitted in July 2012.

Bayer also submitted an NDA to the FDA for treating GIST in August 2012, which was approved in February 2013.

The drug also secured FDA approval for use as a second-line therapy for hepatocellular carcinoma (HCC) in April 2017, while EU approval for the same indication was received in August 2017.

Colorectal cancer (CRC) emanates from the large intestine or the rectum. In its metastatic stage (mCRC), the disease is likely to spread to the rest of the body.

The disease is the fourth deadliest type of cancer. According to National Institute of Health’s estimates, 143,460 new cases of colorectal cancer were diagnosed in the US and more than 51,690 of them died from the disease in 2012. It has also been revealed that around 50% of cases are diagnosed with metastases.

GIST is a type of cancer that originates in the gastrointestinal tract and cannot be surgically removed. It is estimated that up to 6,000 new cases of GIST are diagnosed every year in the US.

Hepatocellular carcinoma is a type of cancer that emanates from the liver. According to the National Cancer Institute estimates, 40,710 new cases of liver cancer will be diagnosed in 2017, while 28,920 deaths are expected.

The drug is available in 40mg doses for oral administration.

“The US Food and Drug Administration (FDA) approved stivarga in September 2012 for the treatment of mCRC patients.”

Bayer conducted Phase I clinical trials on Stivarga between March 2011 and July 2011. The non-randomised, open-label study was conducted on 24 patients to determine the pharmacokinetics of a single oral dose of Stivarga in healthy volunteers.

Bayer began a Phase II clinical trial on Stivarga in 2011. This randomised, multi-centre, placebo-controlled and parallel assignment is expected to be completed by 2021. It will evaluate the effectiveness of Stivarga in combination with Folfilri versus a placebo, with Folfilri as second-line therapy in 240 patients with mCRC.

FDA and MHLW approvals for Stivarga were based on a Phase III clinical trial known as the Colorectal Cancer Treated With Regorafenib or Placebo After Failure of Standard Therapy (CORRECT) study.

“Stivarga contains an oral multikinase inhibitor. The drug inhibits a range of kinases involved in tumour growth and progression.”

It was a multi-centre, randomised, placebo-controlled, double-blind, and international clinical trial that enrolled 760 mCRC patients who were randomised to receive either Stivarga plus best supportive care (BSC), or placebo plus BSC. The treatment cycles consisted of administering stivarga 160mg or matching placebo once daily for three weeks on / one week off, plus BSC.

Bayer conducted another Phase III clinical trial to investigate Stivarga for the treatment of unresectable GIST in patients whose disease had progressed despite prior treatment with Imatinib and Sunitinib. The results of the study showed a significant increase in PFS.

FDA approval and the Committee for Medicinal Products for Human Use CHMP’s decision for GIST indication was based on a pivotal Phase III clinical trial known as GIST Regorafenib in progressive disease (GRID).

The results of this study demonstrated that patients treated with Stivarga plus BSC statistically improved median PFS by 4.8 months, compared to 0.9 months in the placebo arm.

EU approval for Stivarga for treating GIST was also based on the positive results from the Phase III GRID trial.

Clincal trials on Stivarga for the treatment of liver cancer

FDA approval of Stivarga for liver cancer was based on results obtained from Phase III international, multi-centre, placebo-controlled REgorafenib after SORafenib (RESORCE) trials, which enrolled 573 HCC patients who were treated with Nexavar or sorafenib.

The patient group administered with Stivarga witnessed a 62% death rate, compared to 72% in the placebo group.

Zaltrap (ziv-aflibercept) is a recombinant fusion protein indicated for the treatment of metastatic colorectal cancer (mCRC).