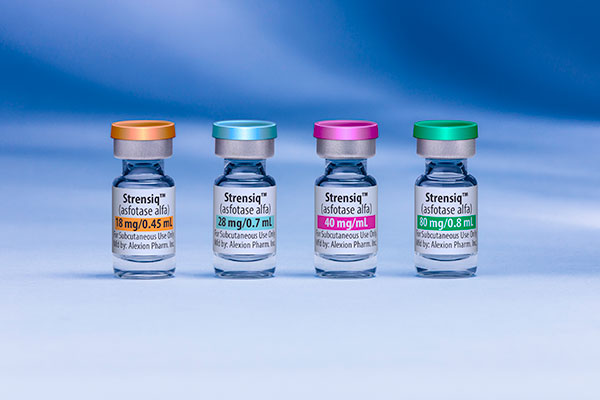 Strensiq (asfotase alfa) is the first enzyme replacement therapy (ERT) approved in the US for the treatment of perinatal / infantile and juvenile-onset hypophosphatasia (HPP), which is a life-threatening and ultra-rare metabolic disorder.

The drug was discovered by Enobia Pharma, which was acquired by Alexion Pharmaceuticals in 2011.

US Food and Drug Administration (FDA) granted breakthrough therapy designation and approved the drug in October 2015. The biologics license application (BLA) was accepted for priority review in March 2015.

The drug was approved by the European Commission (EC) in September 2015, following the positive opinion granted by the Committee for Medicinal Products for Human Use (CHMP) in June 2015. It was the first therapy approved in the European Union (EU) and received marketing authorisation in all 28 EU member states, including Iceland, Norway and Lichtenstein.

A new drug application (NDA) for Strensiq was approved by Japan’s Ministry of Health, Labour and Welfare (MHLW) in July 2015. It was the first therapy approved for HPP in Japan. The drug is also approved in Canada.

"Strensiq is an innovative bone-targeted enzyme replacement therapy that targets the root cause of HPP."

This results in bone deformity, destruction, skeletal abnormalities and other systemic complications, including muscle weakness, seizures, pain and respiratory failure leading to premature death in infants.

It is an ultra-rare disease, which affects less than 20 patients per million. It affects people of all ages and is classified by the age of the patient at the onset of symptoms of the disease.

Strensiq is an innovative bone-targeted enzyme replacement therapy that targets the root cause of HPP.

HPP is caused by the deficiency in tissue non-specific alkaline phosphatase (TNSALP) activity, which leads to elevated levels of TNSALP substrates, including inorganic pyrophosphate (PPi).

Elevated PPi levels block hydroxyapatite crystal growth, inhibit bone mineralisation and lead to the accumulation of unmineralised bone matrix, which manifests as rickets and bone deformations in infants and children.

Strensiq, which contains a formulation of asfotase alfa, works by replacing the missing enzyme. Asfotase alfa is a soluble glycoprotein composed of two identical polypeptide chains.

Each chain consists of the catalytic domain of TNSALP, the human immunoglobulin G1 Fc domain and a deca-aspartate peptide, which is used as a bone-targeting domain.

Strensiq is available as an aqueous solution supplied in single-use glass vials in different dosage forms and strengths for subcutaneous administration only.

Vraylar (cariprazine) for the Treatment of Bipolar Disorder and Schizophrenia, US

Vraylar (cariprazine) is a once-daily, oral, atypical antipsychotic drug indicated for the treatment of adults with bipolar I disorder and schizophrenia.

Approval for the drug from regulatory authorities was based on results from four clinical trials and supporting extension trials conducted on patients with perinatal / infantile and juvenile-onset HPP. Subjects received treatment with Strensiq for up to six and a half years.

Results demonstrated that 97% of newborns or infants with HPP (or perinatal / infantile-onset HPP), treated with Strensiq, showed significant survival rates, compared to 42% of patients who received historical treatments.

The estimated invasive ventilator-free survival was 96% for Strensiq treated patients compared to 31% for historical control patients.

In patients with juvenile-onset HPP (six to 12 years), treatment with the drug showed substantial improvements in the skeletal manifestations of HPP at 24 weeks compared to historical controls.

By month 54, it was noted that 100% of juvenile-onset patients treated with Strensiq responded to the treatment, in terms of bone healing, compared to 6% of patients in the historical control group. Patients also witnessed improvements in height and weight.

The most common adverse events recorded during the study were injection site reactions, lipodystrophy, ectopic calcifications and hypersensitivity reactions.