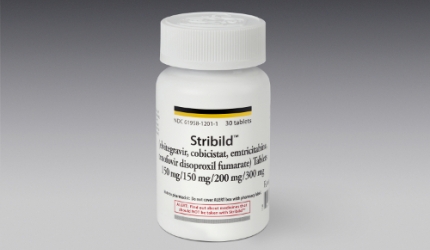 Stribild is a combination of four compounds; elvitegravir, cobicistat, emtricitabine and tenofovir disoproxil fumarate. The drug is indicated for the treatment of HIV-1 infection in adults who have never received antiretroviral treatment for the disease.

Stribild is developed and manufactured by Gilead Sciences under a licence agreement with Japan Tobacco (JT) for the elvitegravir component. The other components of the drug, namely cobicistat, emtricitabine and tenofovir disoproxil fumarate, were developed by Gilead.

Gilead Sciences received approval from the US Food and Drug Administration (FDA) for Stribild for the treatment of HIV-1 infection in adults in August 2012. The drug was referred to as Quad before the approval. Stribild also received marketing approval in Canada, South Korea and Australia.

The Human Immunodeficiency Virus (HIV) is a lentivirus that delivers a significant amount of genetic information into the DNA of the host cell. It is responsible for causing life-threatening acquired immunodeficiency syndrome (AIDS) by weakening the immune system. HIV is categorised into two types, HIV-1 and HIV-2. HIV-1 is more virulent and infective than HIV-2.

It is currently estimated that about 1.2 million people in the US are living with HIV and more than 50,000 new cases of infections are being registered each year.

Stribild’s drug composition and mechanism of action against HIV-1

The drug inhibits the HIV virus to integrate into the genetic material of human cells. The drug is available in the form of a tablet, which can be administered orally.

The FDA approval for Stribild was based on the clinical data received from the two Phase III pivotal clinical studies known as study 102 and study 103. The studies were conducted for over 48 weeks. They were double-blind, active-controlled and randomised studies that enrolled over 1,408 adult patients who had not been previously treated for HIV. The EC approval for Stribild was also based on the results obtained from the same two phase III pivotal clinical trials.

"The drug is indicated for the treatment of HIV-1 infection in adults who have never received antiretroviral treatment for the disease."

Stribild was administered as single tablet regimen in the studies, and compared to Atripla, which contains efavirenz, emtricitabine and tenofovir disoproxil fumarate, taken on its own in study 102, and with ritonavir-boosted atazanavir (RTV) plus Truvada, in study 103.

Stribild met the primary objective of non-inferiority when compared to Atripla and Truvada in both the studies.

The results of study 102 showed that the patients in the Stribild arm reached 88% virologic success where as in Atripla arm it was 84%. The mean increase of CD4+ cell count at week 48 in Stribild arm was 230 cells per mm³ when compared to 193 cells per mm³ in patients treated with Atripla.

The results of study 103 demonstrated that Stribild-administered patients achieved 90% virologic success when compared to 87% in the ATV + RTV + Truvada arm. The mean increase of CD4+ cell count in Stribild-administered patients at week 48 was 202 cells per mm+ compared to 201 cells per mm³ in the ATV + RTV + Truvada-treated subjects.

The common side effects found during the studies included nausea and diarrhoea.

Marketing Stribild in the US and worldwide

In March 2005, Japan Tobacco (JT) licensed Gilead the rights for using elvitegravir, which enabled Gilead to develop and commercialise Stribild across the world except Japan. JT holds the commercial rights of the drug in Japan. Gilead granted the rights to develop the generic version of Stribild to multiple Indian manufacturing partners. Gilead launched Stribild in all 27 countries of the European Union in 2013.