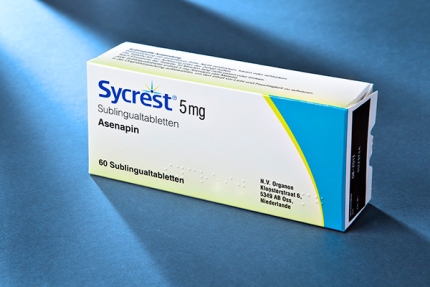 Sycrest (asenapine) is an antipsychotic medicine indicated for the treatment of moderate to severe manic episodes associated with bipolar I disorder. The drug was developed by Merck.

In August 2009, Sycrest was approved by the US Food and Drug Administration (FDA) for treating schizophrenia and also for the acute treatment of manic or mixed episodes associated with bipolar I disorder in adults. Merck launched the drug in the US under the brand name, Saphris.

In September 2010, the European Commission (EC) granted Marketing Authorisation for Sycrest for the treatment of moderate-to-severe manic episodes associated with bipolar I disorder in adults.

In January 2012, Lundbeck launched Sycrest in the UK.

"Sycrest (asenapine) is an antipsychotic medicine indicated for the treatment of moderate to severe manic episodes associated with bipolar I disorder."

Bipolar I disorder is a mood disorder which is characterised by mania or mixed episode. People with this disorder suffer from episodes of manic depression.

It is estimated that about six million people in the US suffer from bipolar I disorder. It is also found that the disorder develops before 50 years of age and most of the affected are found to be in the teenage and early 20s.

Sycrest contains antipsychotic medicine called asenapine. The exact mechanism of action of the drug is not fully known, but it is assumed that the drug works by inhibiting receptors for the neurotransmitters 5-hydroxytrypamine and dopamine, which are involved in causing bipolar disorder.

The drug also helps to normalise the activity of the brain by reducing the symptoms of the disorder. It is available in 5mg doses.

Merck conducted many short and long-term clinical trials on Sycrest. The EC’s approval was based on clinical studies that reviewed the efficacy data from nearly 1,300 patients with bipolar mania.

"It is assumed that the drug works by inhibiting receptors for the neurotransmitters 5-hydroxytrypamine and dopamine, which are involved in causing bipolar disorder."

Merck initiated phase II/III clinical trials of Sycrest on more than 3,150 bipolar I disorder patients with manic or mixed episodes. The purpose of the studies was to establish the safety and efficacy of Sycrest.

The results showed that Sycrest was well tolerated. The common side-effects observed in 10% of the patients included anxiety and somnolence. Sycrest is contradicted in patients with hypersensitivity.

The efficacy of Sycrest was demonstrated in two three-week clinical studies. They were randomised, double-blind, placebo and active-controlled monotherapy trials. The studies enrolled patients who had bipolar I disorder with an acute manic or mixed episode with or without psychotic features.

The results of the studies showed that Sycrest was superior to a placebo in the reduction of manic symptoms over three weeks. The results indicated a statistically significant difference between Sycrest and placebo within two days of the trial.

The FDA approval for Saphris (Sycrest) was based on a phase III clinical trial conducted on more than 3,000 patients with schizophrenia and bipolar mania. The results of the studies demonstrated that Saphris showed statistically significant efficacy versus a placebo.

Marketing Sycrest outside the US