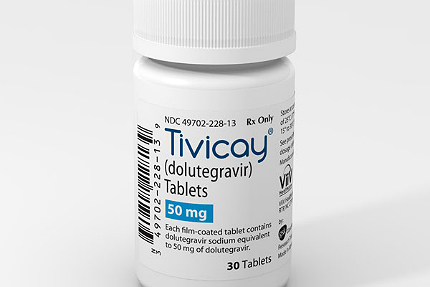 Tivicay (dolutegravir) is an integrase inhibitor indicated for the treatment of the HIV-1 infection in adults and children aged 12 years and above. The drug was developed by ViiV Healthcare, a company established by GlaxoSmithKline, Pfizer and Shionogi.

ViiV Healthcare submitted the new drug application (NDA) for Tivicay in December 2012. It received priority designation for Tivicay from the US Food and Drug Administration (FDA) in February 2013.

The US FDA approved Tivicay 50mg tablets for treating HIV-1 in adults and children aged 12 years and above, and weighing at least 40kg, in August 2013.

Tivicay received positive opinion for marketing authorisation from the Committee for Medicinal Products for Human Use (CHMP) for the treatment of HIV in combination with other antiretroviral drugs in November 2013. Health Canada approved the drug in October 2013 and the Scottish Medicines Consortium (SMC) approved the drug for use within NHS Scotland in May 2014. ViiV Healthcare also submitted regulatory applications for Tivicay in Australia and Brazil.

“The drug was developed by ViiV Healthcare, a company established by GlaxoSmithKline, Pfizer and Shionogi.”

Human immunodeficiency virus (HIV) is a lentivirus that delivers a significant amount of genetic information into the DNA of the host cell.

HIV is responsible for causing acquired immune deficiency syndrome (AIDS), a fatal disease that destroys the immune system if not treated. It is categorised into two types, HIV-1 and HIV-2. HIV-1 is more virulent and infective than HIV-2.

HIV is estimated to affect about 50,000 people in the US every year, according to the estimates by Centre for Disease Control and Prevention. The disease resulted in about 15,500 deaths in 2010.

Tivicay is an integrase inhibitor consisting of antiretroviral agent dolutegravir, which is used for treating HIV-1 in adults and children. The drug blocks HIV replication by averting the viral DNA from assimilating into the genetic material of human immune cells (T-cells).

Tivicay is available in 50mg tablet form for oral administration.

The marketing application submitted to the FDA was based on four Phase III clinical trials which were conducted on more than 2,557 patients who included HIV affected adults and children aged 12 years and above.

“The drug blocks HIV replication by averting the viral DNA from assimilating into the genetic material of human immune cells.”

The results of the four Phase III studies showed that patients treated with Tivicay regimens were effective in reducing viral loads.

The first Phase III clinical trial on Tivicay was known as SPRING-2 study. It evaluated once-daily Tivicay versus twice-daily raltegravir. It enrolled 822 HIV infected patients and was conducted for 48 weeks.

The second Phase III clinical trial was known as SINGLE study. It enrolled 833 patients with HIV infection. It evaluated once-daily Tivicay plus abacavir / lamivudine versus the single tablet regimen Atripla. The study was conducted for 48 weeks.

The third Phase III clinical trial, known as the SAILING study, enrolled 719 HIV patients who failed on current therapy but not treated with an integrase inhibitor. The study evaluated once-daily Tivicay versus twice-daily raltegravir for 24 weeks.

The results of the third study showed that at week 24, the patients treated with Tivicay regimen were virologically suppressed by 79% when compared to 70% in raltegravir-administered patients. The overall tolerability in Tivicay patients was similar to that of raltegravir patients.

The fourth Phase III study known as VIKING-3 study evaluated twice-daily Tivicay. It enrolled 183 HIV patients with who were resistant to multiple classes of HIV medicines, including integrase inhibitors such as raltegravir or elvitegravir.

The study results demonstrated that HIV RNA levels declined by 1.4 log10 c/mL after seven days of treatment. It also showed that participants who were subsequently virologically suppressed included 63% with Tivicay to their background regimen at week 24. The study, however, observed poor virologic response in subjects treated with Tivicay twice daily dose.

Tivicay is marketed in the US by ViiV Healthcare and manufactured by GlaxoSmithKline (GSK). The sales of Tivicay are expected to reach about $900m by 2017 in the US, according to Thomson Reuters’ estimates.

Sustiva (efavirenz) is an antiretroviral indicated for treatment of paediatric patients affected with the HIV-1 infection.