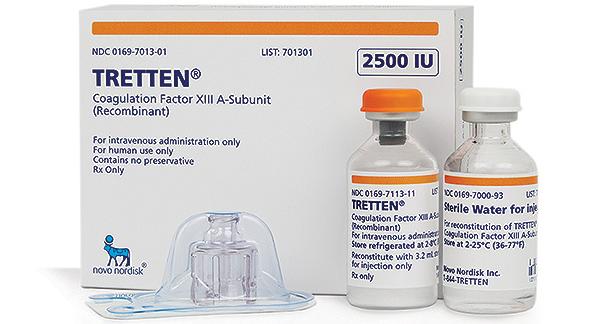 Tretten is the world’s first recombinant treatment available for the prevention of bleeding in adults and children suffering from congenital factor XIII (FXIII) A-subunit deficiency. The drug was discovered and developed by Novo Nordisk.

Tretten was approved by the US Food and Drug Administration (FDA) in December 2013 for the prevention of bleeding in people with congenital factor XIII (FXIII) A-subunit deficiency. The drug was also given orphan designation in the US.

"Congenital FXIII A-subunit deficiency is a very rare and inherited bleeding disease that occurs due to the lack of a clotting protein called FXIII."

Congenital FXIII A-subunit deficiency is a very rare and inherited bleeding disease that occurs due to the lack of a clotting protein called FXIII. Mutations in the A subunit gene located in the chromosome are the reason for the disease.

The disease commonly occurs in one among three to five million births in the US. It is estimated that a total of 1,054 patients were diagnosed for congenital FXIII deficiency in 2011 internationally, and 108 out of those were from the US.

The drug will be available in a glass vial of 2,500IU (15mg), which is mixed with sterile water for intravenous administration.

Rixubis is for the control and prevention of bleeding episodes and perioperative management in treatment of adult patients suffering from haemophilia.

FDA approval for Tretten was based on the results obtained from a phase III clinical trial. The multi centre, open label, and not-controlled clinical study was conducted on 41 subjects for a period of 52 weeks. It was conducted to establish Tretten’s safety and efficacy in preventing the bleeding in patients with congenital FXIII A-subunit deficiency.

The results of the study demonstrated that the patients who were treated with monthly dose of Tretten 35IU/kg injection significantly showed a drop in the number of treatment-requiring bleeding episodes when compared with a historic control group of individuals. The study also showed that the patients who had an average annual bleeding rate of 1.68 experienced significantly lower bleeding episode rate of 0.14 when treated with Tretten.

The most common adverse reactions found during the clinical study included headache, pain in the extremities, injection site pain, and D-dimer increase.

Novo Nordisk expects to launch and distribute Tretten in the US market in early 2014. Other medications available in the market for the treatment of the same indication include Corifact manufactured by CSL Behring.