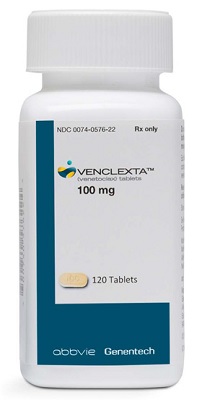 Venclexta (Venetoclax) is an oral formulation developed by AbbVie in collaboration with Genentech and Roche, for the treatment of chronic lymphocytic leukaemia patients with 17p deletion.

The new drug application (NDA) for Venclexta was submitted to the US Food and Drug Administration (FDA) on 29 October 2015.

The US FDA approved the drug as a treatment for patients with chronic lymphocytic leukaemia with 17p deletion, who have already received at least one prior therapy, on 11 April 2016.

The European Medical Agency (EMA) has also validated the marketing authorisation application (MAA) for the drug for the same indication.

It is the most common type of leukaemia where too many lymphocytes (a type of white blood cells) are produced by the bone marrow.

The symptoms usually associated with CLL are painless swelling of lymph nodes in the neck, underarm, stomach or groin regions, fatigue, pain in the ribs, fever, infection, and weight loss.

The BCL-2 protein is usually highly expressed in CLL cells, where it prevents the apoptosis (death) of lymphocytes and also makes them resistant to chemotherapeutics. Venclexta binds to the BCL-2 protein to displace the pro-apoptotic proteins such as BIM and triggers mitochondrial outer membrane permeabilisation and activation of caspases.

The FDA approval of Venclexta was based on the results obtained from the M13-982 study, which was a phase two, open-label, single-arm and multi-centre trial conducted on 106 patients with relapsed or refractory CLL with 17p deletion to evaluate the drug’s safety and efficacy.

"The new drug application (NDA) for Venclexta was submitted to the US Food and Drug Administration (FDA) on 29 October 2015."

The patients were selected by testing their blood samples using Vysis CLL FISH probe kit to confirm the 17p deletion. They were randomised to receive Venclexta through a weekly increased dosage of 20mg once-daily and increasing to 50mg, 100mg, 200mg and 400mg until the disease progression or unacceptable toxicity.

The study met the primary endpoint of 80% overall response rate (ORR). The median time of first response was 0.8 months (range: 0.1 to 8.1 months), whereas the median duration of response ranged from 2.9 to 19.0 months.

Venclexta’s safety was also evaluated from a pooled data of 240 CLL patients who were previously treated in two phase II and one phase I trial.