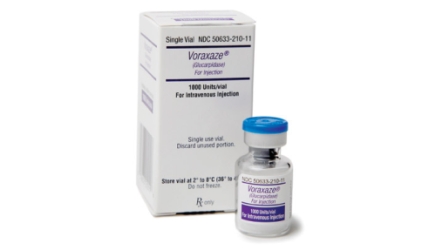 Voraxaze (glucarpidase) is an antidote indicated for the treatment of plasma methotrexate (MTX) toxicity in patients with delayed elimination of methotrexate due to kidney dysfunction.

Protherics, which was acquired by BTG International in 2008, initially developed Voraxaze. After the acquisition BTG International completed the development of Voraxaze and submitted the product for US approval.

In January 2012, the drug received approval under priority review from the US Food and Drug Administration (FDA) for the treatment of toxic plasma methotrexate concentrations (>1 micromole per litre) in patients with delayed methotrexate clearance due to impaired renal function.

Methotrexate (MTX) is a chemotherapeutic drug used for the treatment of cancer and other autoimmune diseases.

When a high dose MTX is used in certain cancers such as osteosarcoma, leukaemia and lymphoma, patients may develop acute kidney injury, leading to delayed elimination of MTX, an oncologic emergency. MTX toxicity can subsequently develop due to excessive MTX exposure. The signs and symptoms of MTX toxicity include severe vomiting, diarrhoea, or mouth sores and low blood platelets or anaemia.

Voraxaze is an antidote drug that contains glucarpidase, a recombinant bacterial enzyme also known as carboxypeptidase G2. The drug works by lowering the MTX levels in blood through the conversion of MTX into inactive metabolites.

In the event of kidney dysfunction, Voraxaze provides an alternate pathway for the elimination of MTX from the body. Voraxaze has been shown to reduce plasma MTX concentrations >95% within 15 minutes of administration, which was sustained for up to eight days.

The drug is administered intravenously in the form of a bolus injection.

Voraxaze was studied under a compassionate use programme by the National Cancer Institute (NCI) beginning in 1993. BTG acquired Voraxaze in 2003 and collaborated with the NCI through 2007, at which time BTG continued the compassionate use study under its own programme.

"In the event of kidney dysfunction, Voraxaze provides an alternate pathway for the elimination of MTX from the body."

Between November 1993 to June 2009, 492 patients with renal toxicity were treated with Voraxaze in the US and Europe. The average age of the patients was 18 years. The study enroled 41% NHL, 30% osteogenic sarcoma, 23% ALL, and 7% other malignancies patients.

The study’s results demonstrated that Voraxaze was well-tolerated. Voraxaze reduced the methotrexate concentrations by 99% in patients with kidney delayed clearance of MTX. The adverse events reported during the clinical studies included paresthesia, flushing, nausea, vomiting, hypotension and headache.

The FDA approval for Voraxaze was based on an efficacy subset for an open-label single arm clinical study (n=22 evaluable patients), while safety was evaluated based on the efficacy study as well as additional compassionate use data (n = 290 patients).

The primary efficacy endpoint of the clinical study was the percent of patients achieving a rapid and sustained clinically important reduction (RSCIR) in plasma MTX concentrations, defined as an attainment of plasma methotrexate concentration ≤1 μmol/L at 15 minutes that was sustained for up to 8 days following the initial injection.

The results of the study demonstrated that 10 out of 22 patients achieved RSCIR, Plasma MTX was reduced by ≥ 97% within 15 minutes in all 22 patients, and was maintained at a > 95% reduction up to 8 days in 20 of the 22 patients. The most common adverse events reported during the clinical studies included paresthesia, flushing, nausea, vomiting, hypotension and headache.

Marketing Voraxaze in the US

"Voraxaze was studied under a compassionate use programme by the National Cancer Institute (NCI) beginning in 1993."

BTG International received approval for Voraxaze from the FDA in January 2012. The drug was launched in the US market in April 2012. BTG appointed ASD Healthcare as the sole specialty distributor of Voraxaze in the US, in April 2012. Voraxaze is also available to Cardinal and McKesson customers on a drop ship basis.

Voraxaze is the only drug currently available in the market for the reduction of toxic plasma MTX concentrations.