Venous thromboembolism is a condition in which clots form in the deep veins of the leg, rupture and enter the pulmonary artery. It is the third most common cardiovascular disease.
A molecule of Xarelto blocking the active site of a Factor Xa protein.
Activated Factor X converts large amounts of prothrombin to thrombin.
Xarelto inhibits Factor Xa, the critical link in the coagulation cascade. 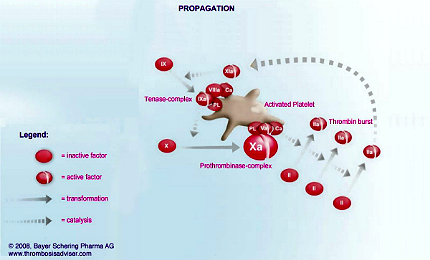 The product of a joint development programme between Bayer and Johnson & Johnson, Xarelto (rivaroxaban) is a new oral anticoagulant. It is indicated for the primary prevention and treatment of venous thromboembolism (VTE) following orthopaedic surgery. Clinical trials are also ongoing to evaluate Xarelto (rivaroxaban) for stroke prevention in patients with atrial fibrillation and acute coronary syndrome.

Xarelto (rivaroxaban) has been evaluated in more than 40,000 patients. At the end of October 2007, Bayer submitted a marketing authorisation application (MAA) to the European Medicines Agency (EMEA) for approval to market Xarelto (rivaroxaban) for VTE prevention after major orthopaedic surgery of the lower limbs. Data from the pivotal RECORD 3 trial were used to support the submission.

In July 2008, the companies received the green light from European regulators for the use of Xarelto (rivaroxaban) for VTE prevention in adult patients undergoing elective hip or knee replacement surgery.

In July 2008, Bayer submitted a new drug application for Xarelto to the US Food and Drug Administration (FDA) based on the RECORD 3 trial. Following the submission, in May 2009, the FDA denied approval of Xarelto and issued a complete response letter to Bayer. The letter did not require Bayer to conduct any additional clinical or non-clinical studies, but raised a few questions on the side effects of Xarelto.

In November 2009, hopes for approval of Xarelto were reinforced when Bayer reported positive results from an extended Phase III study of Xarelto. The study demonstrated 82% lower risk in the formation of a dangerous venous blood clot in thrombosis-prone patients. Bayer presented data in response to the CRL to the FDA in the first half of 2010.

In July 2011, Xarelto was approved by the FDA for prevention and treatment of prophylaxis of deep vein thrombosis (DVT) following orthopaedic surgery. The drug received approval from more than 110 countries across the world to date. It is now being marketed in the US by Janssen Pharmaceuticals.

The European Committee recommended approval of Xarelto for the indication in September 2011. The marketing application for Xarelto in Japan was approved by the Japanese Ministry of Health, Labour and Welfare, in January 2012.

The burden of venous thromboembolism (VTE)

VTE is the formation of a blood clot or thrombus in the vein, which may occlude the vein or rupture and lodge elsewhere in the body, such as in an artery.

VTE encompasses both deep-vein thrombosis (DVT) and pulmonary embolism (PE), in which clots form in the deep veins of the leg rupture and become lodged in the pulmonary artery. After heart attack and stroke, it is the third most common cardiovascular disease.

In the US alone, it is estimated that two million people are affected by VTE. Of these, 60,000 die from PE, which occurs when a clot in the deep veins of the leg breaks away and becomes lodged in the pulmonary artery. In the majority of cases VTE is a silent disease, producing no overt symptoms and as a consequence it is probably under-diagnosed.

The formation of a blood clot is the end product of a highly regulated enzymatic cascade process called the coagulation cascade. Factor Xa is the critical link in the coagulation cascade, where the extrinsic and intrinsic pathways meet to form the common pathway. Its formation enables the conversion of prothrombin to thrombin, which catalyses the formation of fibrin from fibrinogen. Since Factor Xa is the only enzyme that can cleave prothrombin to thrombin, it is central to the clotting cascade.

Xarelto (rivaroxaban) offers the convenience of oral administration without the need for coagulation monitoring. This is a major step forward in anticoagulant therapy.

With more than 40,000 patients receiving Xarelto (rivaroxaban) in clinical trials, it is considered to be the most studied oral direct Factor Xa inhibitor in development.

Clinical trial data on this new drug was certainly very encouraging, with evidence from the pivotal Phase III RECORD3 (Regulation of Coagulation in major Orthopaedic surgery reducing the Risk of DVT and PE) trial suggesting that rivaroxaban may be superior to standard therapy for VTE prevention following orthopaedic surgery.

A significantly greater reduction in risk of developing major VTE (the composite of proximal DVT, non-fatal PE and VTE-related death) was also observed in this trial: one percent of rivaroxaban-treated patients versus 2.6% of enoxaparin-treated patients (RRR 62%; p=0.01).

Rivaroxaban-treated patients also had a much lower frequency of symptomatic VTE, another secondary endpoint (1.0% vs. 2.7%; RRR 64%). Consistent with other trial data, the frequency of major bleeding events was similar to enoxaparin (0.6% vs. 0.5% respectively).

The FDA approval of Xarelto for the prevention of stroke in atrial fibrillation patients was based on the results of the Rocket AF Phase III study. The double-blind and randomised study recruited more than 14,000 patients. It compared the safety and efficacy of Xarelto with warfarin. Preliminary results, announced in October 2010, indicated that the study had met the primary endpoint.

Xarelto was also investigated for the treatment for acute coronary syndrome, a condition wherein a blood clot blocks a coronary artery, which can cause heart attacks. Clinical trials for this indication included the Phase II ATLAS ACS TIMI 46 study and the Phase III ATLAS ACS 2-TIMI 51 study.

The ATLAS ACS TIMI 46 trial started in November 2006 and recruited 3,490 patients. It was completed in October 2008. Results from the study indicated that Xarelto was effective in reducing cardiovascular death and stroke in acute coronary syndrome patients.

The ATLAS ACS 2-TIMI 51 study was initiated in November 2008. The double blind, randomised, placebo-controlled trial recruited 15,526 patients to compare the safety and efficacy of Xarelto with placebo.

In November 2011, Bayer announced positive results from the ATLAS ACS 2-TIMI 51 study. Compared to standard therapy, Xarelto was able to reduce the risk of cardiovascular death and stroke in ACS patients.

The FDA has granted Xarelto a fast-track designation for this indication. In December 2011, Bayer’s partner Janssen Research & Development submitted an application to the FDA for the US marketing authorisation of Xarelto for secondary prevention after an Acute Coronary Syndrome. An application was also submitted for marketing authorisation of Xarelto to the European Medicines Agency (EMA) in December 2011.

The approval for Xarelto in Japan was based on the global ROCKET AF and J-ROCKET AF clinical studies. The two clinical studies evaluated Xarelto versus dose-adjusted warfarin in patients with non-valvular atrial fibrillation at risk of stroke.

In March 2013, Bayer in partnership with Janssen Research & Development initiated a Phase III clinical study on Xarelto for the treatment of patients with chronic heart failure (HF) and significant coronary artery disease (CAD).

The clinical trial, known as COMMANDER-HF study, will evaluate the efficacy of Xarelto 2.5mg twice daily in comparison to placebo. The study will enrol more than 5,000 patients with chronic HF and significant CAD. The primary endpoint of the study will be to find the composite of all-cause mortality.

Standard anticoagulants include oral agents, such as the vitamin K antagonist warfarin, and aspirin, together with injectable heparins, which are currently the mainstay of VTE prevention following orthopaedic surgery.

Data from the Xarelto (rivaroxaban) clinical trials programme suggest the time is fast approaching when a once-daily, oral anticoagulant that has a low propensity to interact with other medicines and doesn’t require regular monitoring becomes a clinical reality. In Europe it is now poised to compete with Boehringer Ingelheim’s Pradaxa (dabigatran etexilate).

Brilinta is an anti-platelet drug which decreases the platelet aggregation and prevents blood clots. It was developed by AstraZeneca for the treatment of acute coronary syndrome (ACS), a disease related to the coronary arteries.

Lixiana (edoxaban) is an oral anticoagulant developed by Daiichi Sankyo, a pharmaceutical company based in Japan. It is being developed for a range of indications, including atrial fibrillation, venous thromboembolism and arterial thromboembolism.