Dupuytren's contracture is a progressive condition that causes the fingers to bend back towards the palm. Image courtesy of Keith Denkler. 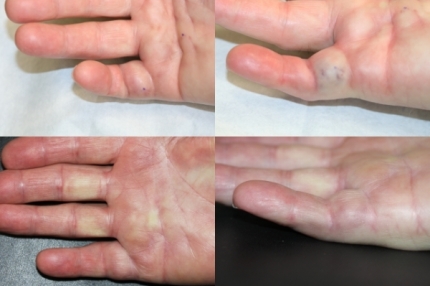 Xiaflex is the first drug indicated for treating Dupuytren’s contracture. The drug was developed by Auxilium Pharmaceuticals in collaboration with BioSpecifics Technologies.

Phase III clinical trials of Xiaflex were completed in 2009 and the drug received US Food and Drug Administration (FDA) approval in February 2010. The drug is marketed in 28 European Union countries by Swedish Orphan Biovitrum. The drug has also been approved for the treatment of Dupuytren’s contracture in Canada and Australia.

Auxilium received US FDA approval for Xiaflex for the treatment of Peyronie’s disease (PD) in December 2013.

Dupuytren’s contracture is a progressive condition that causes the fingers to bend back towards the palm, preventing sufferers from extending them fully. It affects the fibrous tissue that lies under the dermatitis on the palm. As a result of collagen deposits accumulating in fascia, rope-like cords are formed and these prevent the fingers from straightening normally. The condition’s exact cause is not fully known.

The disease is also associated with metacarpal phalangeal and proximal intraphalangeal joints. The little and ring fingers are most frequently affected.

“Auxilium received US FDA approval for Xiaflex for the treatment of Peyronie’s disease (PD) in December 2013.”

The condition has historically been treated by open surgical procedure and takes its name from French military surgeon Guillaume Dupuytren, who described one such operation. However, these procedures are tricky and can potentially result in injuries to the nerves. Other risks include damage to arteries and tendons and infections.

Peyronie’s disease, in its advanced stages, distorts penile erection and causes problems during intercourse due to the presence of collagen plaque. The disease is estimated to affect about 65,000 to 120,000 people every year in the US.

Xiaflex is a collagenase enzyme that has been developed to treat Dupuytren’s contracture non-surgically. It is the first biologic drug approved by the FDA to treat the condition.

The drug is obtained from the Clostridium histolyticum bacteria and works by breaking down excessive collagen in the hands. Once injected into the collagen cord of the affected hand, it can reduce scar tissue in a forceful and quick fashion.

Clinical trials of Xiaflex began in September 2007, and the Phase III trial concluded in February 2009.

A total of 13 trials, nine of which were Phase III trials, were conducted with patients suffering from chronic Dupuytren’s contracture in Australia, Europe and the US, among others.

Xiaflex was revealed to be a safe non-surgical treatment for Dupuytren’s contracture in a Phase II trial. A total of 35 patients were involved (32 men and three women), with a mean age of 65 years.

Zorvolex (diclofenac) for the Treatment of Osteoarthritis Pain, USA

Zorvolex (diclofenac) is a nonsteroidal anti-inflammatory drug currently indicated for the treatment of mild to moderate acute pain in adults.

Xiaflex was also studied for Peyronie’s disease indication in a series of 12 clinical trials in the US as part of Phase IIb trials.

During the trials, which involved 145 Peyronie patients, Xiaflex was successful in reducing the penile curvature and presented a statistically improved quality of life.

The FDA approval for Xiaflex to treat PD was based on the results of pivotal IMPRESS I and II (The Investigation for Maximal Peyronie’s Reduction Efficacy and Safety Studies) trials. The Phase III double-blinded placebo-controlled studies assessed Xiaflex for the treatment of PD. The studies enrolled 832 adult males with PD, who were administered with four treatment cycles of Xiaflex or placebo (weeks 0, 6, 12, 18) and were followed for weeks 24-52.

The studies met the co-primary endpoints and showed statistical significance for mean per cent change in penile curvature deformity and mean change in the PDQ bother domain score in Xiaflex subjects in comparison with the placebo patients.

Xiaflex was initially marketed in Europe and Asia by Auxilium in partnership with Pfizer. The partnership ended in 2013. Auxilium selected Swedish Orphan Biovitrum, a new partner, to market Xiaflex in 28 European Union countries and in Switzerland, Norway and Iceland in July 2013.