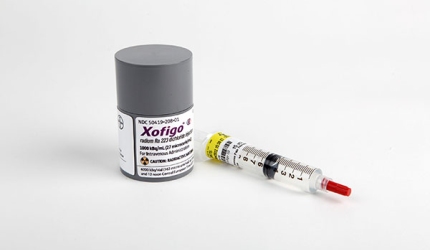 Xofigo (radium 223 dichloride) is an intravenous radiotherapeutic drug indicated for the treatment of patients suffering from prostate cancer with bone metastases. The drug was developed by Bayer HealthCare in collaboration with Algeta.

In May 2013, Bayer received approval for Xofigo from the US Food and Drug Administration (FDA) for the treatment of patients with castration-resistant prostate cancer (CRPC), symptomatic bone metastases and no known visceral metastatic disease.

"In May 2013, Bayer received approval for Xofigo from the US Food and Drug Administration (FDA) for the treatment of patients with castration-resistant prostate cancer (CRPC), symptomatic bone metastases and no known visceral metastatic disease."

Prostate cancer develops in the prostate gland of the male reproductive system. When prostate cancer starts spreading beyond the prostate, it commonly goes to the bone. Bone metastases occur in about 90% of patients with castration-resistant prostate cancer (CRPC). The disease leads to weakening of the bone, and thereby results in pain, fracture and other complications.

CRPC is the most common cancer among men in the US. It is the sixth leading cause of death from cancer in men. It is estimated that more than 899,000 men across the world were diagnosed with the disease and 258,000 people died of the disease in 2008.

The drug is administered intravenously through an injection with a dose of 50kBq (1.35 microcurie) per kg body weight.

The FDA approval for Xofigo was based on the results of a Phase III clinical study known as ALSYMPCA (alpharadin in symptomatic prostate cancer). It was a randomised, double-blind, placebo controlled study. It enrolled 921 patients at more than 100 centres across 19 countries. The patients enrolled had castration-resistant prostate cancer with symptomatic bone metastases.

"Bone metastases occur in about 90% of patients with castration-resistant prostate cancer (CRPC)."

The patients were administered with Xofigo 50 kBq (1.35 microcurie)/kg intravenously every four weeks for six cycles with best standard of care, or best standard of care plus matching placebo. The primary efficacy endpoint of the study was overall survival (OS). The secondary endpoints included finding time to first symptomatic skeletal event (SSE) according to the external beam radiation therapy (EBRT).

An updated analysis was conducted after the study, which found the median OS to be 14.9 months in Xofigo patients compared to 11.3 months in placebo group.

Commercialisation and marketing of Xofigo

Developed by Coughar Biotechnology, abiraterone acetate (CB7630) was discovered by the UK Institute for Cancer Research.

Bayer entered into an agreement with Algeta for the development and commercialisation of Xofigo, in September 2009. As per the agreement, Bayer has the right to develop and apply for the health authority approvals across the world, and commercialise the drug internationally.

Bayer has begun the commercial production of Xofigo and the drug is expected to enter the US market shortly. The drug will be co-promoted in the US by Algeta US. Bayer also holds the international marketing rights of Xofigo.