Zoledronic acid is the active substance in Zometa.
Cancer can metastasise and spread to various other parts of the body.
Zometa helps in preventing bone complications in cancer patients. 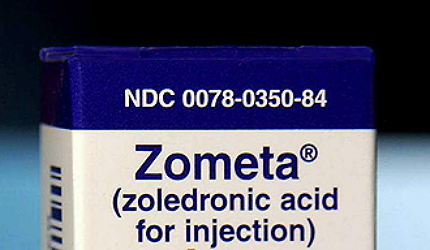 Zometa is a bone resorption inhibitor indicated for the treatment of bone complications in patients with advanced cancer. It has several anticancer properties which help in improving the overall survival rate of metastatic bone cancer patients.

Developed by Novartis, zometa is approved for use in 95 countries, including the US and in Europe. It is the most widely used bisphosphonate and is approved to treat bone complications caused by multiple myeloma and certain metastatic cancers of the breast, lung and prostate.

Zometa can also be used to treat hypercalcemia of malignancy (HCM) characterised by excess calcium in the blood due to bone metastases, which is caused by bone loss.

"Ibandronate and zometa together hold the largest share in the bisphosphonate market. The average rate of growth of these drugs has been about 20% during 2010-2012."

Cancer can easily metastasise or spread to other parts of body. Cells from the original tumour break away and, via the blood or lymph nodes, settle at other parts of the body, including bones.

Bone metastases usually have an impact on the spine, pelvis, hip and skull. The most common cancers which cause bone metastases include breast, lung, kidney and prostate. Symptoms of the disease include bone pain, fractures, back pain and nausea.

An estimated 250,000 patients are affected annually by bone metastases in the US.

Zoledronic acid, a bisphosphonate, is the active substance in zometa. It works by blocking the action of osteoclasts which are responsible for damaging bone tissue. This action reduces the amount of bone loss, which in turn reduces bone breakage and fractures in cancer patients. It also helps in lowering the quantity of calcium released into the body, an indication of HCM.

Phase III studies recruited more than 3,000 adults with bone metastases. Two studies compared zometa with placebo and the third compared it with Pamidronate.

A clinical trial comparing zometa with pamidronate recruited 1,648 patients with multiple myeloma or metastatic breast cancer. The trial proved that zometa was more effective than pamidronate, with 44% patients receiving zometa having one skeletal event compared to 46% of pamidronate treated patients.

Zometa has also been tested in patients with HCM in two studies. A total of 287 patients were recruited in the studies, in which zometa was compared with pamidronate. The primary endpoint of the studies was the number of patients whose calcium levels became normal after ten days of treatment.

The two studies indicated that 88% of the zometa treated patients had normal calcium levels within ten days, compared to 70% of those treated with pamidronate.

"Developed by Novartis, zometa is approved for use in 95 countries, including the US and in Europe."

Ibandronate and zometa together hold the largest share in the bisphosphonate market. The average rate of growth of these drugs has been about 20% during 2010-2012. The need for treatments for bone disorders is growing as the population continues to age.