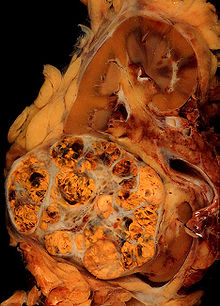 According to the final OS analysis, a median OS of 28.8 months was reported for tivozanib, compared to 29.3 months for the comparator arm, sorafenib.

A statistical difference between the two arms was not observed.

"The safety and efficacy results from TIVO-1 and other clinical trials of tivozanib in advanced RCC suggest it may provide an important new first line treatment option for patients with this aggressive disease," Motzer said.

The study was conducted with a one-sided crossover for patients randomised to take sorafenib, resulting in a substantial difference in the use of subsequent therapies.

OS is a secondary endpoint of the TIVO-1 study, while the primary endpoint is progression-free survival (PFS).

The anti-tumour activity of tivozanib subsequent to sorafenib treatment resulted in a median PFS of 8.4 months and response rate of 13%.

AVEO chief medical officer Dr William Slichenmyer said; "We believe that these data being presented at ASCO GU reinforce the positive efficacy results and safety profile of tivozanib in patients with advanced RCC."

Image: An 8cm carcinoma of the lower pole of the kidney. Photo: Courtesy of Ed Uthman.