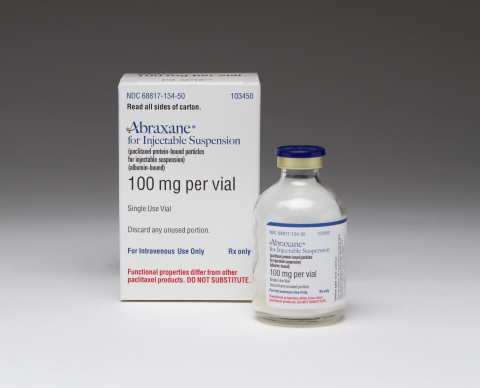 The US Food and Drug Administration (FDA) has approved use of Celgene’s Abraxane in combination with gemcitabine for the treatment of patients with late-stage adenocarcinoma of the pancreas.

Adenocarcinoma is a sub-type of exocrine tumours which accounts for about 95% of cancers of the pancreas.

According to Celgene, the drug’s trials have shown that patients with pancreatic cancer had higher survival rate when they were treated with Abraxane.

Abraxane, a chemotherapy drug that can slow the growth of certain tumors, is intended to be used in combination with another chemotherapy drug called gemcitabine, in patients with pancreatic cancer that has spread to other parts of the body.

Celgene executive vice president of hematology and oncology Jean-Pierre Bizzari said for over 15 years, treatment with gemcitabine has been the standard of care in this disease.

"The addition of ABRAXANE to gemcitabine demonstrated meaningful improvements across key efficacy outcomes, including overall survival, with a well-characterised safety profile," Bizzari said.

While the primary endpoint for the study was overall survival, secondary endpoints were progression-free survival and overall response rate determined by independent radiological review.

Under the MPACT study, about 861 patients with metastatic pancreatic cancer were treated with Abraxane plus gemcitabine which showed a significant improvement in median overall survival compared to gemcitabine alone (8.5 vs. 6.7 months) (HR 0.72, P<0.0001).

In 2005 Celgene’s Abraxane was first approved to treat breast cancer, and in 2012 for non-small cell lung cancer.

"The addition of ABRAXANE to gemcitabine demonstrated meaningful improvements across key efficacy outcomes, including overall survival, with a well-characterised safety profile."

"The FDA approval of ABRAXANE is an important step for a disease that desperately needs treatment advances to improve patient outcomes," Fleshman said.

"The Pancreatic Cancer Action Network will continue to work with the medical community to build upon this success and advance our goals in the fight against pancreatic cancer."

Pancreatic cancer is ranked the fourth most fatal cancer in the US and out of 45,000 patients diagnosed in 2013, 38,000 will die from the disease, according to the National Cancer Institute.

The only option to permanently remove or cure pancreatic cancer is to undergo surgery, but when a person is diagnosed, it is too late for surgery.

FDA director of the Office of Hematology and Oncology Products in Center for Drug Evaluation and Research Richard Pazdur said patients with pancreatic cancer are often diagnosed after the cancer has advanced and cannot be surgically removed.

"In these situations, and in situations when the cancer has progressed following surgery, options like Abraxane can help prolong a patient’s life," Pazdur said.