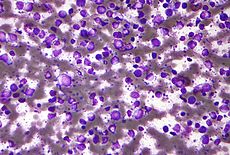 Eli Lilly and Company has announced that a Phase III study designed to evaluate enzastaurin as a monotherapy in the prevention of relapse in patients with diffuse large B-cell lymphoma (DLBCL) has failed to yeild positive results.

Lilly Oncology product development and medical affairs vice president Richard Gaynor said; "However, our oncology pipeline is still one of the most robust across the industry containing more than 20 molecules, including two Phase III molecules in five different tumor types."

A statistically significant increase in disease-free survival in patients at high risk of relapse following rituximab-based chemotherapy compared to placebo was not noted.

The safety data obtained from the study are similar to previous studies.

Patients with histologically confirmed DLBCL and an International Prognostic Index (IPI) score of three to five at diagnosis were enrolled in the study. Subjects were randomised with enzastaurin or placebo in 2:1 ratio.

Treatment was continued until the patients’ disease progressed, they had unacceptable adverse events, or completed three years of therapy.