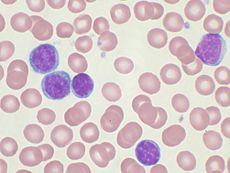 Genmab has reported top-line results from a Phase II study of ofatumumab combined with bendamustine in untreated and relapsed chronic lymphocytic leukemia (CLL).

In the study, which included 44 patients with untreated CLL and 53 patients with relapsed CLL, 87% of patients completed the full treatment course of six cycles.

"This is only the first set of key data we expect to report for ofatumumab over the next 15 months," Jan van de Winkel said.

"Data from five pivotal studies are due during this time period, including results from a Phase III study of ofatumumab in front line CLL during the first half of 2013."

Ofatumumab and bendamustine treatment was well-tolerated by patients in the study, while the most commonly reported adverse reactions included neutropenia, nausea, rash, pyrexia and thrombocytopenia.

The investigator-assessed overall response rate was the primary objective of the study.