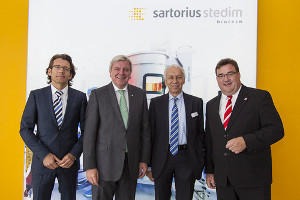 The new 100,000ft² facility will manufacture bioreactors and further production equipment for customers in the biopharmaceutical industry.

State government of Hesse prime minister, Volker Bouffier, said that by building a new production facility in the region, Sartorius has reinforced its close ties with northern Hesse.

"We offer companies an excellent infrastructure and intentionally promote the regional economy so that innovative medium-sized companies will invest in and stay with us," Bouffier said.

With the opening of the new building complex, which provides space for a high-tech manufacturing hall and offices for around 240 employees, the company has moved from its previous bioreactor production facility in Melsungen, Germany, where it had reached maximum capacity limits.

Sartorius has rented the premises in a long-term lease from Robos, the building owner.

Sartorius CEO and executive board chairman Joachim Kreuzburg said the new plant enables the company to substantially enhance its manufacturing processes and creates additional capacity in view of the rising demand for biopharmaceutical production equipment.

"As a result, we are optimally prepared for further expansion, especially for single-use bioreactors," Kreuzburg said.