An expected FDA decision on Amylyx Pharmaceuticals’ Amyotrophic lateral sclerosis (ALS) asset in June will headline a busy year in drug development for this rare disease. Five major trials have results anticipated in 2022, including highly anticipated data from the HEALEY platform study.

With only two FDA-approved drugs targeting ALS, there is a glaring unmet need for new treatments. Only generic riluzole, which first gained FDA approval in 1995, shows a modest effect on survival. Mitsubishi Tanabe Pharma’s Radicava (edaravone) gained FDA approval in 2017 for its demonstrated effect on ALS functionality, but its trial design and data did not meet European standards to secure regulatory support. 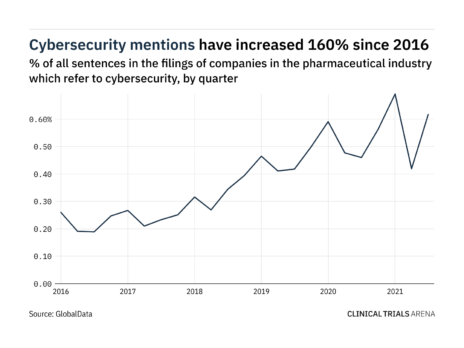 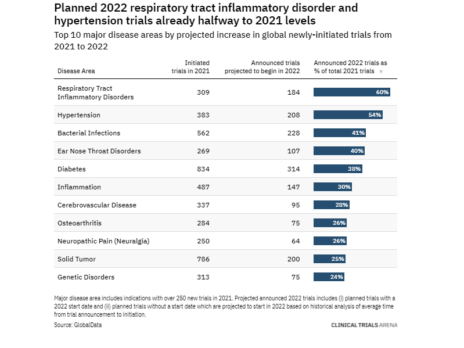 ALS is a rare neurodegenerative disease characterized by the death of motor neurons. The disease occurs in approximately two out of every 100,000 people, and patients have an average life expectancy of four years after diagnosis.

With a PDUFA date of 29 June already set, Amylyx’s AMX0035 leads the pack of ALS drug candidates vying for a regulatory nod. In the 135-patient, Phase II CENTAUR trial (NCT03127514), AMX0035 met is primary endpoint of slowing decline in function after six months. The primary outcome was measured using the ALS Functional Rating Scale-Revised (ALSFRS-R) metric, the most common assessment of disease progression in ALS clinical trials. An interim analysis of an open-label follow-up study found the treatment can prolong survival by approximately 6.5 months.

Before granting AMX0035 a Priority Review designation, the FDA initially said Amylyx would require Phase III results to file for an AMX0035 approval. The agency then reversed this decision, allowing the company to file an NDA submission based on CENTAUR data. Nonetheless, there is the ongoing 600-patient Phase III PHOENIX trial (NCT05021536) studying AMX0035 in ALS, which has an estimated primary completion date of November 2023.

AMX0035 is a combination of small molecules tauroursodeoxycholic acid (TUDCA) and sodium phenylbutyrate. It is intended to protect nerve cells from damage by targeting the endoplasmic reticulum and mitochondrial-dependent neurodegeneration in ALS. On 4 January, the company announced it had submitted a Marketing Authorization Application (MAA) to the EMA.

HEALEY to make a splash with readouts

Biohaven’s verdiperstat is a myeloperoxidase (MPO) enzyme inhibitor, which can reduce microglial activation and neuroinflammation in ALS. Phase II/III results from its 167-patient HEALEY cohort (NCT04436510) are expected in mid-2022. Verdiperstat is also in development for multiple system atrophy (MSA).

Clene’s CNMAU-8 is a gold nanocrystal suspension with remyelinating and neuroprotective effects, and is under development for ALS, Parkinson’s disease and multiple sclerosis. Phase II/III results for the 161-patient CNMAU-8 cohort (NCT04414345) in HEALEY are anticipated in the first half of this year. Previously, the 45-patient Phase II RESCUE-ALS trial of CNMAU-8 (NCT04098406) missed its primary endpoint of MUNIX, a summated assessment of motor dysfunction and disease progression in ALS.

Prilenia’s pridopidine is an S1R agonist designed to enhance neuroprotection and neuroplasticity. It is also a dopamine D2 receptor antagonist, which stabilizes psychomotor activity. Results for its 160-patient HEALY ALS cohort (NCT04615923) are expected in the third quarter of 2022. The drug is also in a 480-patient Phase III trial (NCT04556656) in Huntington’s disease.

There are a couple of assets in early phase trials with data expected this year. Wave Life Sciences is recruiting a 42-patient, Phase I/II trial (NCT04931862) of WVE-004 in patients with C9orf72-associated ALS or frontotemporal dementia. WVE-004 is a guanine nucleotide exchange of inhibitor of C9orf72—the most common genetic cause of ALS, which accounts for around 12% of cases.

The trial has incidence of adverse events as its primary endpoint, with secondary endpoints measuring WVE-004’s pharmacokinetics and pharmacodynamics. Wave said it anticipates clinical data in 2022, which will inform a decision on next development steps.

Meanwhile, Eledon Pharmaceuticals’ monoclonal antibody (mAb) AT-1501 is in a 52-patient, open-label, Phase IIa trial in ALS (NCT04322149). The mAb blocks the CD40L pathway, which could improve muscle function and slow disease progression.

Eledon has said this safety-focused study will have topline results in 2022. AT-1501 has FDA orphan drug designation, and a previous Phase I, single ascending dose trial found the drug to be safe and well-tolerated.