Over the past two years, many clinical trial sponsors and CROs have been focused on learning how to best incorporate decentralised clinical trial (DCT) approaches into their regular operations. After this hectic adoption peak, during which decentralisation mechanisms like remote monitoring and virtual visits have become more widespread, it is time for all stakeholders to solidify the DCT principles.

This will allow the industry to advance into the next levels of trial decentralisation and fully realise its benefits. To that end, both the excitement about the DCT promise and the lessons learned so far need to be carried over into 2023.

To keep riding the wave of DCTs, the industry cannot forego innovation and it needs to continue identifying new areas of decentralised approaches to bring into the organisations, says Craig Lipset, co-founder and co-chairman of Decentralized Trials & Research Alliance (DTRA). While it is important to continue stabilising the core set of decentralised research tools and drive global adoption, there is still room for innovation, he adds.

However, sponsors and CROs are not the only ones that need to keep the ball rolling in order to solidify DCTs in 2023. From new regulatory frameworks to the modernisation of terminology, experts tell Clinical Trials Arena about what they expect to see from DCTs in 2023.

Validation of decentralised processes is likely to be a major trend this year, says Lehana Thabane, professor of biostatistics at McMaster University, vice-president research at St Joseph’s Healthcare Hamilton, and 2022-23 president of the Society for Clinical Trials. For example, it is still not clear if a patient providing blood pressure measurements at home yields the same information if an investigator had done the same thing at a site.

Alongside the validation of processes, comes the need to improve reporting on decentralised studies. Thabane explains that science is based and dependent on replication. “One study is not good enough, we need to replicate that study in other settings,” he notes. Good quality and transparent reporting will help others to learn from success stories and advance science based on decentralisation.

Indeed, Shawn Tedman, vice president of biopharma innovation at a digital health company ixlayer, says that the industry is at the point where early case studies are being read out to show the pros of DCTs. “The bar has been moved higher in terms of efficiency, but we should keep pushing and do better,” he adds.

One of the key highlights on the regulatory front was the release of the DCT recommendations paper by EU regulators late last year, which was a part of the EMA’s ACT EU initiative. “While it’s not a formal guidance document, it is a very exciting moment to see an EU-level document,” says Karen Noonan, senior vice president of global regulatory policy at the Association of Clinical Research Organizations (ACRO).

Noonan expects that this will continue this year. “If not full-fledged guidance documents, we’ll see more regulators weigh in,” she adds. Indeed, some form of framework from other agencies would be helpful to better understand regulatory expectations in different regions, Lipset says.

Regulatory guidance comes up a lot when talking about health testing, notes Tedman. He explains that more clarity is needed when it comes to who is included and delegated in the Statement of Investigator (Form FDA 1572), such as site personnel and the principal investigator versus other people performing standard-of-care testing.

Once there is a formal common ground between regulators and sponsors, new frameworks will help to demystify certain areas, such as electronic signatures with informed consent. This will help lay a path of more norms and harmonisation globally, Lipset adds.

Decentralisation is the first step towards personalised trials, as previously reported on Clinical Trials Arena. Noonan says that one of the key buzzwords last year was flexibility, meaning that while some DCT approaches might work for one patient, they might not be suitable for another. “I don’t think it’s a dichotomy between the central investigator site and the patient’s home. There is a continuum of locational flexibility and possibilities,” she explains.

While flexibility is favoured by the participants, it might pose challenges for the sponsors. Lipset explains that it is extremely complicated to have redundant infrastructure on standby waiting for the patient to make a decision if they want to attend the appointment in person or not. “For us to realise this future, we have to get much more efficient with our existing tools and approaches,” he says.

To do so, the industry needs to be better at predictive analytics to better understand and forecast what patients might need in the future. Anecdotally, Amazon knows the purchasing behaviours better than the actual person does. This is based on large amounts of data and predictive analytics, something that the clinical trial industry should also be able to do, Lipset says. “It doesn’t mean that we will always get it right, but it will help us to make better and more rational use of expensive resources and give people the future of choice and flexibility.”

Flexibility and personalisation are moving the needle from full decentralisation to a hybrid approach, which is a hot topic at the moment, Tedman says. “We are at the spot where we are going to talk more about the spectrum of hybrid decentralisation instead of binary decentralised or not,” he adds.

Decentralisation of clinical trials came with ambiguous language and terminology. “When you have a phenomenon that’s actually forced upon people, everybody’s going to find their own way of defining it that works best for them,” Thabane says. However, words matter and a common nomenclature is needed to avoid confusion between stakeholders. DTRA took a stab at it last year by releasing a glossary of DCT terminology.

One of the terms that may need modernisation is the research site, Lipset says. He explains that before DCTs, a site was a building where an investigator or a coordinator was hosting visits. In today’s environment, it is much more complicated as the investigator might be talking to a patient remotely or the participant may visit a local pharmacy instead. “We as an industry do need to relook at some of those terms and make sure that they’re keeping pace,” he says.

Also, a lot of new roles are entering the clinical research enterprise. For example, some sponsor protocols are starting to define local community health care providers and their role in a clinical trial, which was never a role before, Lipset adds.

The concept of investigator also needs to be redefined, Thabane says. Some of the clinical trial aspects are completely in the control of a patient and certain procedures are done by the participant rather than the investigator. “The issue then becomes where do we draw the line between being an investigator and being a participant in a trial,” he notes.

How to successfully lead DCTs in 2023

To keep the DCT momentum going, Noonan advises sponsors to break down stakeholders into five groups: industry, regulators, institutional review boards (IRBs) or ethics committees, patients and sites. It is important to keep all five groups in mind when designing DCTs, and early planning and conversations amongst all of them will lead to success.

For those who have not yet decentralised their trials, Tedman explains that the risk has shifted from trying decentralisation to not trying to use it. “Five years ago, you really had to stick your neck out if you were advocating for DCTs. Today, you would raise some eyebrows if you were trying to slow down DCTs.”

While it is not too late to jump on board, Lipset argues that soon it will be the case that sites and patients will see non-DCT protocols as out of touch and out of date with patient needs. For many indications, sponsors are operating in a competitive environment, so the patient will see that burden looks substantially different in some studies versus others, he explains.

Sponsors who already successfully implemented decentralised approaches should share their experiences and knowledge, Thabane says. “We do rely on people willingly sharing the challenges they faced and their successes in order to make it easier for others who are trying to do similar things.”

Editorial content is independently produced and follows the highest standards of journalistic integrity. Topic sponsors are not involved in the creation of editorial content.

Year in review: who were the main DCT players in 2022?

Clinical Trials Arena reviews the companies and countries that mentioned decentralisation most often in their clinical trial protocols.

Who and what is at the crest of the clinical trial decentralisation wave?

DCT Adoption Tracker: In an exclusive analysis, Clinical Trials Arena combed through drug trial public information to find out which decentralised approaches are making waves and talked to experts to put trends into context.

The Evidence for Decentralised Clinical Trials

For many years, decentralised trials have been touted as a potential solution to a wide range of clinical trial inefficiencies, from traditional challenges with recruiting and retaining patients to recent, large-scale disruption to participation and site access caused by the pandemic. Now, as decentralisation is increasingly put into practice across a range of therapeutic areas, concrete evidence is being published to support this promise.

This whitepaper looks at the impact of a fully virtual design on a recent clinical trial of patients with atrial fibrillation. Supported by trial data from the Decentralised Trial in Afib Patients (DeTAP), the paper shows how significant improvements and success in recruitment, medicine adherence, study engagement, and patient experience can be gained through virtualisation. To learn more, please download. 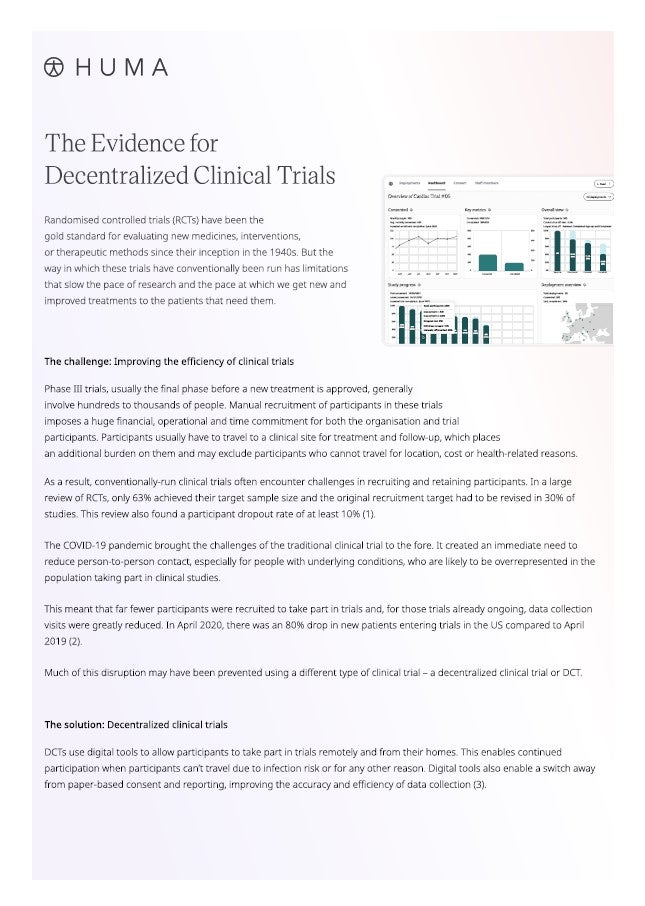