Following both of Ophthotech’s failed phase III clinical trials (OPH1002 and OPH1003) of the combination of Genentech’s Lucentis (ranibizumab injection) with its proprietary anti-platelet-derived growth factor (anti-PDGF) drug, Fovista, the company announced this week that the last Phase III clinical trial (OPH1004) of Fovista in combination with Regeneron ’s Eylea (aflibercept) or Genentech’s Avastin (bevacizumab) developed for the treatment of wet age-related macular degeneration (wAMD) has also failed. However, Fovista is not the only drug that Ophthotech has in its AMD pipeline portfolio. The company is developing Zimura (avacincaptad pegol), a complement 5 (C5) inhibitor, for the treatment of wAMD and for patients with geographic atrophy (GA), a form of dry AMD (dAMD). Given the fact that the OPH1004 trial has come to an end, Ophthotech may now have the opportunity to focus more of its efforts on the Zimura development program.

Zimura was found to be safe and well tolerated in a Phase I/IIa trial of wAMD, as well as in a Phase I/IIa trial of dAMD patients. Ophthotech initially focused on the treatment of patients with GA, for whom currently treatments are unavailable. The Phase I/IIa study of Zimura was a small, multicenter, uncontrolled, open-label study that enrolled 47 patients with GA due to dAMD, who were randomized to either a 0.3mg or 1.0mg dose group and received monthly Zimura over a 36-week treatment period. Reduction in the mean growth of GA lesion area was observed with a relative trend favoring the higher dose group, at 1.00mm2 and 0.78mm2 mean growth for the 0.3mg and 1.0mg groups, respectively. Although the trial was not designed to detect a difference in efficacy between the dose groups, the company believes that the results show a possible drug effect, as this relative trend in decreased growth in GA lesion area was no longer evident when the drug was administered on a reduced dosing schedule.

The 24-month, phase II/III trial of Zimura in GA patients was initiated in January 2016, and Ophthotech is planning to conduct an interim analysis to assess the safety and efficacy of Zimura compared to sham at month 18 of the trial to decide whether or not to continue and expand this trial. During this stage, patients will be randomized into three groups, and will receive monthly injections of 1.0mg or 2.0mg of Zimura, or monthly sham injections as the control arm.

In its 2017 annual report, Ophthotech noted its plan to reassess the Zimura development program based on interim results obtained from the Phase II/III randomized, double-masked, controlled clinical trial that is designed to evaluate the safety and efficacy of Zimura monotherapy in GA patients with dAMD. In addition, the annual report noted that the continuation of the phase II/III Zimura program will also be affected by the Phase III clinical trial results of a competitor’s complement inhibitor, which is also being studied for the treatment of GA. This competitor drug that Ophthotech refers to is most likely Genentech’s lampalizumab, as it is the only complement inhibitor in Phase III development for GA in dAMD patients. This is encouraging, because Genentech has already reported positive top-line results from the Phase III trial of lampalizumab; however, it is possible that only a subgroup of GA patients will benefit from this therapy. 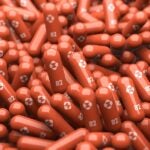 Local inflammation and activation of the complement cascade is believed to play a role in drusen formation, a hallmark of dAMD that can be a precursor to the development of wAMD. Inhibition of this key step in the complement cascade at the level of C5 prevents the formation of C5a and C5b-9 key terminal fragments, which play role in the initiation of inflammation and cell lysis, respectively, and is thereby believed to be involved in the development of both dAMD and wAMD.

Numerous pharmaceutical and biotechnology companies have had products in all stages of clinical and preclinical development targeting this complement signaling pathway. To date, however, no product of this type has reached the market, and many seemingly promising anti-complement drug candidates, such as Alcon ’s peptide drug, POT-4 (compastatin), and Alexion’s C5 antibody, Soliris, have failed in Phase I and II of clinical development. Lampalizumab is currently the only complement inhibitor that is likely to come to market as the first dAMD drug.

However, Ophthotech’s Zimura, will likely to face competition if it makes it to the dAMD market. Apellis Pharmaceutical is developing APL-2, a reformulation of POT-4 that inhibits C3, which is being evaluated in a randomized phase IIa clinical trial that will be completed in August 2017. Furthermore, Alcon and Novartisare evaluating two complement inhibitors in combination for the treatment of GA—a monoclonal antibody against C5, known as LFG316, and CLG561, which inhibits another complement pathway protein, known as properdin—following the failure of these drugs to reduce growth of GA lesions when used as monotherapies. This trial is expected to be completed in September 2017. Due to the frequency of products failing in phase I–III trials, it remains to be seen whether any of these companies, including Ophthotech, will become players in the dAMD space with their respective complement inhibitors.