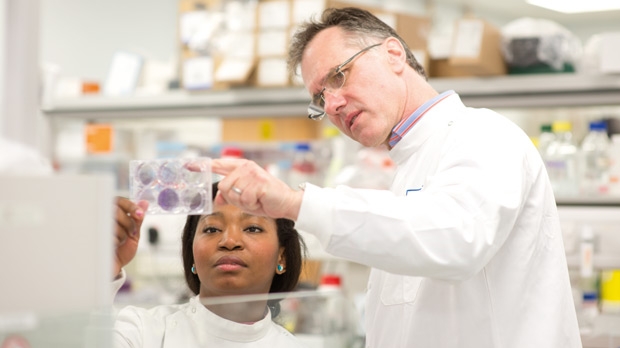 Cancer Research UK's Drug Development Office (DDO) in collaboration with The University of Manchester has started a new clinical trial intended for the treatment of lymphoma patients using the body's own immune system to attack cancerous B-cells growing out of control.

B-cells are specialised immune cells that work as the factories of the immune system, pumping out antibodies into the blood stream. Later these antibodies act as seeker missiles, homing in on targets recognised as harmful to the body and directing immune cells to attack them.

It is reported that in B-cell lymphomas, the B-cells themselves are the problem as more are produced than the body needs and the new therapy uses the body's own weapons against the tumour.

In the trial, an antibody called 'DI-B4' has been designed to target a molecular marker, which is specific to B-cells and young cells that are to become B-cells.

The new DI-B4 antibody helps in providing signals to other immune cells to attack and destroy these B-cells.

"The new DI-B4 antibody helps in providing signals to other immune cells to attack and destroy these B-cells."

The trial, which is expected to last four and a half years with an 18 month follow up, will be managed and run through the Experimental Cancer Medicine Centre (ECMC) Network, an initiative funded by Cancer Research UK and the UK Health Departments.

Cancer Research UK medical oncologist and lead researcher for the study from the University of Southampton Andy Davies said: "Adapting the immune system to fight cancer has become a powerful weapon.

"Drugs like rituximab, which targets a different B-cell marker, have helped many patients, but far too many relapse or become resistant. DI-B4, which targets a marker of both B-cells and the cells that will grow up to be B-cells, could be a more effective treatment and an important alternative for these patients."

03 Dec 2020
Registration is disabled.
We use cookies to ensure that we give you the best experience on our website. If you continue to use this site we will assume that you are happy with it.ContinueLearn more