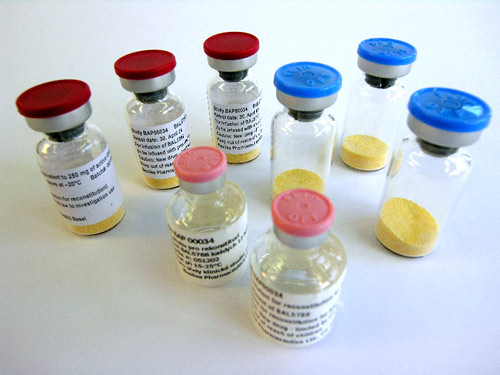 The product of a joint development programme between the Swiss pharmaceutical company Basilea Pharmaceutica AG and Cilag AG International (a Johnson & Johnson company), ceftobiprole medocaril (BAL5788) is a novel cephalosporin antibiotic indicated for the treatment of serious bacterial infections in hospitalised patients.

Ceftobiprole was approved in Canada in June 2008. It is marketed in Canada and Ukraine under the brand name Zeftera for the treatment of complicated skin and soft tissue infections (cSSTI), including diabetic foot infections. It is approved and marketed in Switzerland as Zevtera, for the treatment of cSSTI, again including diabetic foot infections.

Ceftobiprole was filed for regulatory approval in the US and Europe in July 2007, after the successful completion of pivotal Phase III registration trials. Regulatory submission was for the use of ceftobiprole as a treatment for complicated skin and skin structure infections (cSSSI) and cSSTI, including diabetic foot infections. Ceftobiprole is seen as a potential first-line treatment for severe hospital-acquired infections.

In March 2008 the companies faced a setback when the US regulators issued only an approval letter to ceftobiprole. It indicated that the US Food and Drug Administration (FDA) had granted ceftobiprole fast-track status for the treatment of CSSSI caused by MRSA and hospital-acquired pneumonia, including ventilator-associated pneumonia due to suspected or proven MRSA.

Further, the FDA started conducting inspections on the investigator site and issued a sponsor 483 report to Johnson & Johnson. After the completion of the inspection in August 2009, the FDA issued a warning letter to Johnson&Johnson regarding the clinical studies on ceftobiprole held during early 2008. The warning letter claimed that there was a failure in monitoring the studies and a scarcity in the study conduct.

In September 2009, the FDA accepted a review of the Complete Response Letter issued in November 2008. The FDA considered the resubmission, a complete, class 2 response. The response submission was sponsored by J&J and LLC.

In December 2009, the FDA rejected the new drug application submitted for ceftobiprole. The FDA issued a complete response letter stating that the clinical data submitted in support of the application was not reliable. The agency stated that Johnson & Johnson did not monitor the studies as mentioned in the warning letter issued earlier.

In November 2008, the EU Committee for Medicinal Products for Human Use (CHMP) issued a positive benefit-risk opinion and recommendation for ceftobiprole. Basilea announced that it had been verbally informed that the European Medicines Agency (EMA) would conduct Good Clinical Practice (GCP) inspections and until the review of the inspection outcome, the EU commission decision process would be halted.

In June 2010, the EMA rejected a marketing authorisation application for ceftobiprole. The agency’s negative opinion was first provided in February 2010, after it discovered that clinical studies of ceftobiprole were not conducted in accordance with good clinical practice at some study sites. Janssen-Cilag, a Johnson & Johnson subsidiary, requested a re-examination of the opinion. The EMA’s negative opinion was, however, confirmed.

Following rejection of ceftobiprole, Johnson & Johnson handed over the development of the drug to Basilea Pharmaceutica.

In October 2013, the drug received regulatory approval in Europe for the treatment of hospital-acquired pneumonia.

Combating the rise in MRSA

"Following rejection of ceftobiprole, Johnson & Johnson handed over the development of the drug to Basilea Pharmaceutica."

Commonly used to treat infections caused by staphylococci, including S. aureus, use of methicillin is increasingly compromised by a rise in the incidence of resistant strains – so-called MRSA. While S. aureus is rarely a concern in healthy people, it can cause serious infections in hospitalised patients, the elderly and those with weakened immune systems.

Serious infections associated with S. aureus, including MRSA, can include wound infections, abscesses, septicaemia, nosocomial pneumonia, bone infections, and infections of prosthetic devices such as artificial joints and heart valves.

Pre-clinical studies on ceftobiprole, the first of a new class of broad-spectrum anti-MSRA cephalosporins, suggest it has potent activity against MRSA as well as strains of Streptococcus pneumoniae resistant to penicillin. The drug binds to the penicillin-resistant targets in Gram-positive cocci, resulting in potent bactericidal action. This new antibiotic, which is also effective against Gram-negative pathogens, also has a low propensity to induce resistance, an important factor governing the clinical utility of antibiotics.

Approval of ceftobiprole in Canada heralded the arrival of the first broad-spectrum anti-MRSA cephalosporin in the market. At the 49th Interscience Conference on Antimicrobial Agents and Chemotherapy, held in September 2009, it was stated that ceftobiprole can treat MRSA better than vancomycin, daptomycin and linezolid.

The clinical effectiveness of ceftobiprole in its primary indication has been demonstrated in the pivotal STRAUSS 1 and 2 international trials. Involving over 1,600 patients with complicated skin and skin structure infections including diabetic foot infections, these double-blind, placebo-controlled trials were conducted to demonstrate noninferiority, clinical cure rates, efficacy and safety of ceftobiprole to vancomycin or vancomycin plus ceftazidime. The results showed that the treatment with ceftobiprole medocaril was at least as effective as standard comparator agents that included vancomycin.

"This new antibiotic, which is also effective against Gram-negative pathogens, also has a low propensity to induce resistance."

In STRAUSS 1, 500mg of ceftobiprole and 1,000mg of vancomycin were administered for seven to 14 days as one-hour infusions every 12 hours. The treatment with ceftobiprole medocaril achieved a cure rate of 93.3% among clinically evaluable patients, and 91.8% in those with infections due to MRSA. This was comparable to cure rates of 93.5% and 90% respectively with vancomycin. In this trial, ceftobiprole achieved a higher clinical cure rate compared with vancomycin. A total of 784 patients above 18 years of age and diagnosed with cSSSI caused exclusively by gram-positive bacteria were enrolled for the first trial.

Similar results were seen in STRAUSS 2, where ceftobiprole was compared to standard combination therapy with ceftazidime plus vancomycin or placebo. The dosage included 500mg of Ceftobiprole as a two-hour infusion for every eight hours, and 1,000mg of vancomycin as a one-hour infusion for every 12 hours plus 1,000mg of ceftazidime as a two-hour infusion every eight hours. Here, treatment with ceftobiprole achieved cure rates of 91%, compared with 90% for patients in the combination treatment arm.

Among patients with diabetic foot infections, who represented almost a third of all patients, the respective cure rates were 86% and 82%. Consistent with the cephalosporin class of antibiotics, ceftobiprole was well tolerated by patients in these studies.

Nosocomial pneumonia is among the most common infections in intensive care units accounting for about 15% of all hospital-acquired infections.

Two other Phase III trials were undertaken to test the efficacy of the drug in cases of pneumonia and nosocomial pneumonia. However, the studies revealed that the drug was less effective when compared to its competitors.

Mortality exceeds 30% and is highest among mechanically ventilated patients and those infected with MRSA. Selecting the right antibiotic is an important determinant of clinical outcome in such cases.

Basilea’s ceftobiprole medocaril is seen as an important addition to J&J’s current anti-infective portfolio, which includes the antibiotics ofloxacin (Floxin) and levofloxacin (Levaquin). Under the terms of the co-development and marketing agreement, J&J’s Ortho-McNeil Pharmaceutical subsidiary will market ceftobiprole in the US, while Janssen-Cilag will market the drug outside the US. Basilea has retained the option to co-promote ceftobiprole in most major markets, including the US, major European countries, Japan and China.

With the FDA rejecting ceftobiprole, new claims are expected to be filed.

The past decade has seen a dramatic rise in antibiotic resistance in the hospital setting, which is now spreading into nursing homes. MRSA is a particular problem because it displays resistance to most classes of antibiotics; reports suggest that some strains are becoming resistant to vancomycin. There is an urgent need to expand treatment options for this difficult-to-treat pathogen, for which first-line treatment currently includes vancomycin and linezolid.

Volasertib for Treatment of Acute Myeloid Leukaemia (AML), US

Volasertib (BI 6727) is a selective and potent polo-like kinase (Plk) inhibitor, currently being investigated for the treatment of patients with acute myeloid leukaemia (AML).