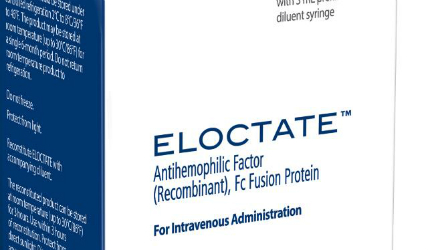 Eloctate is a drug approved for the control and prevention of bleeding episodes in children and adult haemophilia A patients. The drug is developed and marketed by Biogen Idec in collaboration with Swedish Orphan Biovitrum (Sobi).

In June 2014, the US Food and Drug Administration’s (FDA) approved Eloctate for control and prevention of bleeding episodes during surgeries and routine prophylaxis in haemophilia A-affected patients. The treatment received orphan-drug designation from the FDA as it is used for the treatment of a rare disease.

Eloctate is also being reviewed by the regulatory authorities for approval in many countries including Canada, Australia and Japan.

An intravenous injection indicated for the control and prevention of bleeding episodes.

Haemophilia A affects approximately one in 5,000 male births. According to a global survey conducted by World Federation of Hemophilia in 2012, the disease is estimated to have affected about 142,000 people worldwide, with 16,000 in the US.

Eloctate is the first approved drug with Fc fusion protein that is used for the treatment of haemophilia A with prolonged circulation in the body. It was developed by linking coagulation factor VIII molecule (also known as anti-haemophilic factor) to the Fc portion of IgG1 (G subclass 1) protein. The drug works by temporarily replacing the coagulation factor VIII and cycling it back into blood circulation. It is administered intravenously.

The A-LONG study was an open label, multi centre Phase III clinical study, which enrolled 165 haemophilia A male patients aged 12 years and above.

Results demonstrated that adults and adolescent patients who were administered Eloctate through weekly prophylaxis arm and individualised-interval prophylaxis dosing arm had achieved a statistically significant reduction of bleeding episodes. Results also showed that 98% of the bleeding episodes were controlled when patients were administered with one or two Eloctate infusions.

"Results demonstrated that adults and adolescent patients who were administered Eloctate through weekly prophylaxis arm and individualised-interval prophylaxis dosing arm had achieved a statistically significant reduction of bleeding episodes."

Adverse reactions of Eloctate were recorded in 5.5% of the participants. Common adverse events found in the Eloctate groups included joint pain, abdominal pain, pain after injection, slow heart rate, pain in the chest, cough, cold, headache, low blood pressure and joint swelling. Two or even fewer patients experienced each of these events.

The Kids A-LONG study was conducted on 71 boys with haemophilia A in 23 centres located across eight countries. The global, open label, multi centre clinical study evaluated the patients by administering twice-weekly prophylactic infusions of Eloctate 25IU/kg on day one and 50IU/kg on day four. The dose or interval was adjusted based on individual response.

Study results demonstrated that Eloctate was well-tolerated, no inhibitors to the drug were detected and no cases of serious allergic reactions were reported. Two non-serious events of rash and myalgia relating to Eloctate treatment were reported during the study. A total of 67 participants completed the study. The adverse events reported in the study in Eloctate administered patients were similar and consistent with results seen in adolescents and adults in the A-LONG study.

The Kids A-LONG study was supported by the results from interim safety and pharmacokinetic (PK) data. The study was conducted on 38 boys aged between two and 11 years, with results proving that Eloctate is a well-tolerated drug. When compared with adults, children between the age group of two to five were found to have a shorter half-life of the therapy in the body, so require frequent or higher doses of Eloctate.

Eloctate is the first approved long-acting haemophilia A therapy. Biogen Idec holds the rights to develop, manufacture and market Eloctate in North America.

In March, Biogen Idec in collaboration with Swedish Orphan Biovitrum (Sobi) received FDA approval for Alprolix, which is a similar therapy for the treatment of haemophilia B. Sobi holds the right to develop and commercialise Eloctate and Alprolix in Europe, Russia, the Middle East and Northern Africa.