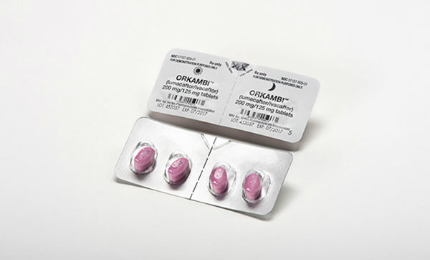 Orkambi (lumacaftor/ivacaftor) is the first approved medicine to treat the underlying cause of cystic fibrosis (CF), a rare, life-threatening genetic disease. The drug was discovered and developed by Vertex Pharmaceuticals.

The new drug application (NDA) for Orkambi was submitted to US Food and Drug Administration (FDA) in November 2014. The Pulmonary-Allergy Drugs Advisory Committee (PADAC) of the FDA recommended its approval in May 2015.

The FDA approved Orkambi as a treatment for the underlying cause of CF for people who over the age of 12 with two copies of F508del mutation and also for those who can be identified with a genetic test, in July 2015.

The drug is also under review by Europe’s European Medicines Agency (EMA), Canada’s Health Canada and Australia’s Therapeutic Goods Administration (TGA). The EMA is expected to make a decision on the drug’s approval by the end of 2015.

"Orkambi is a combination of two active ingredients, which are lumacaftor and ivacaftor."

Cystic fibrosis or the missing protein often leads to the poor flow of salt and water into or out of the cell in a number of organs, including the lungs.

This leads to chronic lung infections due to the build-up of thick and sticky mucus and progressive lung damage that could eventually lead to death.

People with two copies represent the biggest group of people with CF. Out of the estimated 30,000 people affected with CF in the US, approximately 8,500 have two copies of mutation.

North America, Europe and Australia are estimated to have more than 75,000 CF affected people in total.

Orkambi is a combination of two active ingredients, which are lumacaftor and ivacaftor.

The FDA approval of Orkambi was based on results from two Phase III clinical studies, Traffic and Transport, which were conducted to determine the safety and efficacy of the drug.

The two studies enrolled more than 1,100 people with cystic fibrosis with two copies of the F508del mutation belonging to the group over the age of 12.

Patients were divided into two arms in both of the randomised, double-blind, placebo-controlled studies.

The primary endpoint was the absolute change from baseline in the percentage of predicted forced expiratory volume in one second (FEV1) at week 24.

The mean baseline FEV1 was 61% of the predicted value. Significant improvement was recorded in both studies at the primary endpoint in both lumacaftor-ivacaftor dose groups.

The difference between active treatment and placebo with improvement in the percentage of predicted FEV1 ranged between 2.6% and 4% points. The rate of pulmonary exacerbations in pooled analyses was 30%-39%, lower in the treatment groups compared to the placebo group.

Common adverse reactions recorded during the study were shortness of breath and/or chest tightness, upper respiratory tract infection, and gastrointestinal symptoms, including nausea, diarrhoea and gas.