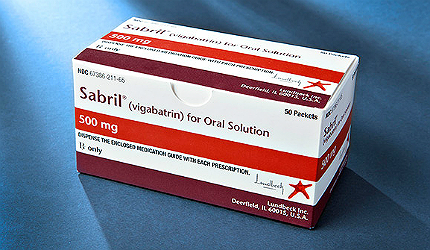 Sabril (vigabatrin) is an antiepileptic drug indicated for the treatment of refractory complex partial seizures (CPS) and infantile spasms (IS).

"The drug reduces the risk of seizures by increasing the level of GABA in the brain."

It was developed by Ovation Pharmaceuticals, which was later acquired by Lundbeck in February 2009.

The Peripheral and Central Nervous System Drugs Advisory Committee appointed by the US Food and Drug Administration (FDA), recommended sabril as an adjunctive treatment for adults with CPS, in January 2009.

In August 2009, sabril was approved by the FDA for the treatment of IS in paediatric patients aged one month to two years, and also as add-on therapy for adult patients with refractory CPS.

Details of CPS and IS conditions

A complex partial seizure is an epileptic seizure, which starts focally within the lobe of the brain and results in loss of consciousness. It is estimated that about three million people in the US are affected by epilepsy and 35% of them have CPS.

Infantile spasms, also known as West Syndrome, is a rare epileptic disorder found in infants. Every year 2,500 new cases of IS are registered across the US.

Sabril is an anti-epileptic drug that contains vigabatrin. The exact mechanism of action of the drug is not known, but it is assumed that the drug works by restraining the enzyme responsible for metabolising gamma-aminobuytric acid transaminase (GABA-T).

The drug reduces the risk of seizures by increasing the level of GABA in the brain. The drug is available in the form of 500mg tablets and powder for oral solution.

The FDA approval for sabril for treating CPS and IS indications was based on two Phase III clinical trials for each indication.

"In August 2009, sabril was approved by the FDA for the treatment of IS in paediatric patients aged one month to two years."

The first Phase III clinical trial for CPS was a randomised, double-blind and placebo-controlled and doseresponse study. It enrolled 174 subjects with CPS. The study was for an eight-week baseline period followed by an 18-week treatment period. The patients were administered with placebo or 1, 3, or 6g/day sabril twice daily.

Study results showed that the patients treated with 3g/day and 6g/day dose of sabril were statistically superior when compared to placebo. It also demonstrated that 6g/day dose was not superior to the 3g/day dose.

The second clinical trial was a randomised, double-blind, placebo-controlled, parallel study. The study enrolled 183 patients with CPS. The study consisted of an eight-week baseline period followed by a 16-week treatment period. The dose of sabril was titrated upward during the trial.

The results of the study demonstrated that the patients treated with sabril 3g/day were statistically superior when compared to the placebo group.

Trobalt (ezogabine / retigabine) is indicated for the treatment of partial-onset epileptic seizures in patients aged more than 18 years old.

The FDA approval for IS indication was also based on two Phase III clinical trials. The first trial was a multicentre, randomised, parallel group, and a partially-blind study. It enrolled 221 patients with IS. Patients were randomised to receive sabril in either low dose consisting 18-36mg/kg/day or high dose consisting 100-148mg/kg/day. The endpoint of the study was finding spasm-free patients for seven consecutive days beginning within the first 14 days of sabril therapy.

The results of the study showed that 17 patients treated with high doses of sabril achieved spasm freedom compared with eight patients in the low dose group.

The second clinical trial on sabril for treating patients with IS enrolled 40 subjects. The study consisted of a pre-treatment period of two-three days, followed by a five-day double-blind treatment phase. Patients were administered with sabril 50mg/kg/day or placebo.

The study results showed that sabril was statistically significant in overall reduction in spasms by 68.9% when compared to 17% in the placebo group.

Lundbeck initiated Phase IV clinical trials on Sabril in December 2010. It is an open label single group assignment which enrolled 80 patients with CPS. The study is initiated across many centres in the US. The primary outcome measure of the study is to find the change in visual fields and measure the change in the retinal structure. The study is expected to be completed by July 2013.

Sabril was launched into the US market in the third quarter of 2009. It is the first therapy approved by the FDA for treatment of IS. Sabril, however, can cause permanent vision loss in infants, children and adults. Central vision and visual acuity are unaffected.