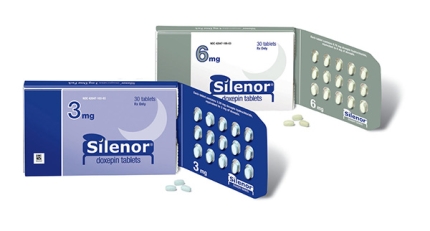 In February 2012, Paladin’s New Drug Submission for Silenor was accepted for review by Health Canada.

"In March 2010, the US Food and Drug Administration (FDA) approved Silenor for the treatment of insomnia characterised by difficulty with sleep maintenance."

Insomnia is a sleep disorder that is characterised by a regular difficulty in falling asleep or staying asleep, or sleep of poor quality. It may lead to serious psychological and physiological health problems.

It is estimated that about 70 million adults in the US are affected by insomnia. According to National Sleep Foundation’s 2012 Sleep in America survey, about 65% of respondents experienced insomnia symptoms, nearly 50% woke up feeling unrefreshed, 42% awake often during the night, and about 30% woke up too early and could not get back to sleep.

Silenor contains doxepin, which is a tricyclic antidepressant used to ease the symptoms of depression. The precise mechanism of action of the drug is not fully known, but it is assumed to work on neurotransmitters, the chemical messengers within the brain.

The drug builds up a neurotransmitter called histamine in the spaces between nerve cells. It is available in 3mg and 6mg oral tablets.

Silenor was approved for the treatment of insomnia based on the clinical data derived from the phase III clinical trials conducted on more than 1,017 adult and elderly subjects with chronic and transient insomnia. The results of all the clinical trials conducted by Somaxon demonstrated that Silenor 3mg and 6mg doses significantly improved the majority of objective and subjective sleep onset. Silenor was effective in treating insomnia characterised by sleep onset difficulty in both transient and chronic insomnia adult populations.

"The precise mechanism of action of the drug is not fully known, but it is assumed to work on neurotransmitters, the chemical messengers within the brain."

Somaxon conducted a phase III clinical trial on Silenor for the evaluation and efficacy assessment of both objective polysomnography (PSG) and subjective measures of sleep. The study enrolled 240 elderly subjects with chronic primary insomnia. It evaluated the safety and efficacy of 1mg and 3mg doses of the drug over a 12-week period.

The results of the study showed that both doses of Silenor achieved statistical significance for objective measures of sleep maintenance, including the primary endpoint of Wake After Sleep Onset (WASO). The effects at week 12 were significantly improved when compared to the results observed at week one.

Somaxon conducted another phase III clinical trial on Silenor, which evaluated the efficacy assessments in both objective PSG and subjective measures of sleep. The study enrolled 565 subjects in a sleep laboratory setting using a phase-advance, first night assessment model of induced transient insomnia.

Marketing Silenor in the US and abroad

Intermezzo is a formulation of zolpidem that is indicated for the treatment of insomnia or sleeping disorders. The drug was discovered by Transcept Pharmaceuticals in 2008.

In August 2010, Somaxon entered into a co-promotion agreement with Procter & Gamble, for marketing Silenor in the US market.

In June 2011, Somaxon sold the commercial rights of Silenor for $129m to Paladin Labs. Paladin holds the marketing rights of Silenor in Canada, Africa and South America. If approved, Silenor will be the first and only prescription therapy for insomnia in Canada.

TRUSELTIQ™ (infigratinib) for the Treatment of Cholangiocarcinoma

TRUSELTIQ™ (infigratinib) is an oral kinase inhibitor indicated for the treatment of previously treated, unresectable locally advanced or metastatic cholangiocarcinoma…

PEPAXTO® (melphalan flufenamide) is a first-in-class peptide-drug conjugate indicated, in combination with the glucocorticoid dexamethasone, for the treatment of relapsed…

EMPAVELI (pegcetacoplan) for the Treatment of Paroxysmal Nocturnal Haemoglobinuria (PNH)