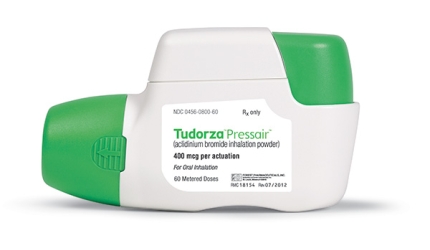 Tudorza Pressair (aclidinium bromide inhalation powder) is an anticholinergic drug indicated for the long-term maintenance treatment of bronchospasm associated with chronic obstructive pulmonary disease (COPD), including chronic bronchitis and emphysema. It was developed by Forest Laboratories in collaboration with Spanish company Almirall.

In July 2012, Forest Laboratories received approval for Tudorza Pressair from the US Food and Drug Administration (FDA).

Chronic obstructive pulmonary disease (COPD) is a lung disease that limits the flow of air to and from the lungs causing shortness of breath. The disease has two forms, namely chronic bronchitis, which involves a long-term cough with mucus, and emphysema, which involves destruction of the lungs. Most of the patients affected by COPD have a blend of both forms of the disease. The main cause of the disease is tobacco smoking.

Tudorza Pressair is an anticholinergic drug that exhibits bronchodilatory effect by blocking the neurotransmitter acetylcholine from binding to M3 receptors in the airway smooth muscle.

The FDA approval for Tudorza Pressair was based on a dose-ranging trial (trial A) for nominal dose selection and three confirmatory phase III trials (trials B, C and D).

“In July 2012, Forest Laboratories received approval for Tudorza Pressair from the US Food and Drug Administration (FDA).”

Trials B, C and D were three randomised, double-blind, placebo-controlled trials evaluating Tudorza Pressair 400mcg twice daily in patients with COPD. Trials B and C were conducted for three months and Trial D had duration of six months. The studies enrolled over 1,276 patients, who were above 40 years of age, had a history of smoking at least 10 pack-years, a forced expiratory volume in one second (FEV1) of at least 30% and less than 80% of predicted normal value, and a ratio of FEV1 over forced vital capacity (FEV1/FVC) of less than 0.7.

The results of the three studies demonstrated that the patients treated with Tudorza Pressair 400mcg twice daily had statistically significant greater bronchodilation when compared to placebo, as measured by a change from baseline in morning pre-dose FEV1 at 12 weeks.

Additionally, serial spirometric evaluations of FEV1 were performed over 12 hours in a subset of patients in the three trials. Improvement of lung function with Tudorza Pressair versus placebo was demonstrated on day 1 and was consistent over the 3 or 6-month treatment period evaluated.

The most common adverse events reported in the clinical trials on Tudorza Pressair included headache, nasopharyngitis and cough.

Spiriva is an anticholinergic drug targeted at chronic obstructive pulmonary disease (COPD). It contains tiotropium bromide as the active ingredient and is administered as an oral medication, through the unique HandiHaler inhalation device.