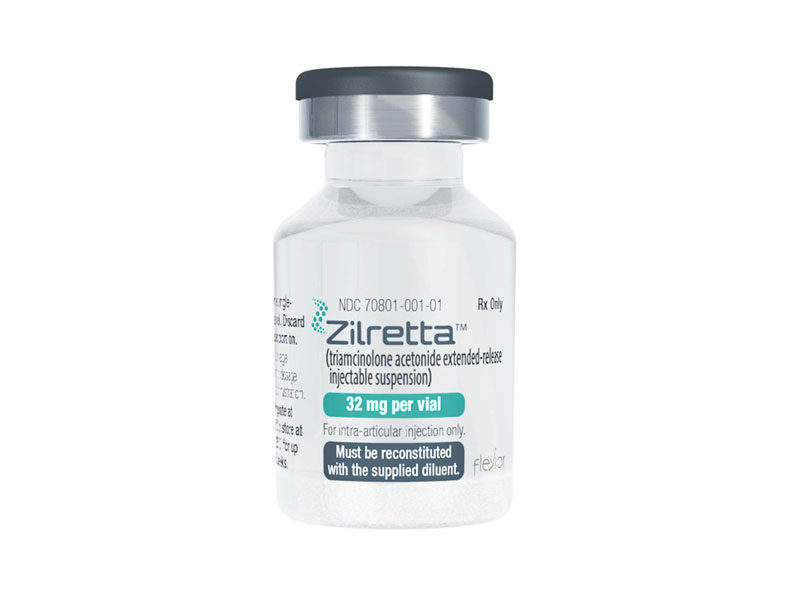 Developed by Flexion Therapeutics, Zilretta’s new drug application (NDA) was submitted to the FDA in December 2016, which was accepted for review in February 2017 and received approval in October 2017.

Osteoarthritis knee pain is a degenerative joint disease, which may result in intermittent discomfort and eventually lead to loss of function, severe chronic pain, and irreversible structural damage.

The chances of the disease generally rise after age 45, but it can also occur in young people.

The disease’s symptoms include pain when moving the knee, stiffness, crepitus, creaking, crunching, a grinding sensation when on the move, and swellings due to extra fluid in the joints.

An estimated five million osteoarthritis patients a year in the US receive either an immediate-release corticosteroid or hyaluronic acid intra-articular injection to manage the pain.

“An estimated 30 million people in the US experience knee pain caused by osteoarthritis, and more than 15 million people were diagnosed with the disease in 2016.”

The drug also blocks the release of arachidonic acid and prevents the synthesis of prostaglandins and leukotrienes.

It is available in 32mg (5ml) dose vials, which can be administered through intra-articular injection.

FDA approval for Zilretta™ was based on results obtained from a pivotal Phase III clinical trial. It was a randomised, double-blind, parallel-arm, placebo and active-controlled study conducted in 37 centres worldwide.

The study enrolled 484 patients with osteoarthritis of the knee, who were treated and followed up for up to 24 weeks.

The primary efficacy endpoint of the study was change from baseline at week 12 in the weekly mean of the average daily pain (ADP) intensity scores evaluated based on a 0-10 numeric rating scale (NRS).

The study results demonstrated that Zilretta was statistically significant in the reduction of pain intensity at the primary endpoint when compared to placebo. The drug also showed reduction in pain intensity scores each week from weeks one through 12.

The adverse effects witnessed by patients treated with Zilretta™ were sinusitis, coughing, and contusions.

Flexion Therapeutics is a specialty pharmaceutical company engaged in the development and marketing of novel, local therapies for the treatment of patients with musculoskeletal conditions including osteoarthritis.

The company plans to launch Zilretta™ in the US market by the end of October 2017.

Other drugs available for the treatment of osteoarthritis include Monovisc (sodium hyaluronate) developed by Anika Therapeutics, and Licofelone developed by Merckle and EuroAlliance partners Alfa Wassermann and Lacer.