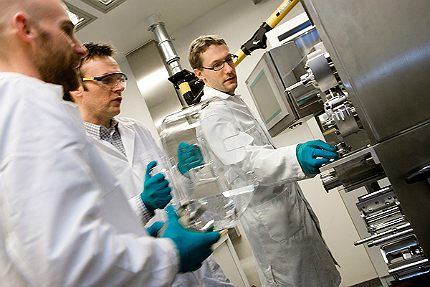 Zubsolv® (buprenorphine and naloxone) is a sublingual tablet indicated as a maintenance treatment for people suffering from opioid dependence.

The drug was discovered and developed by Orexo, which submitted a new drug application (NDA) for Zubsolv® to the US Food and Drug Administration (FDA) in September 2012. It was accepted for FDA review in November 2012.

Orexo received approval from the FDA for Zubsolv® as a maintenance treatment for opioid dependence in July 2013.

In August 2015, Zubsolv® received approval from the FDA for initiation of buprenorphine maintenance therapy in patients with opioid dependence.

“Orexo submitted a new drug application (NDA) for Zubsolv® to the US Food and Drug Administration (FDA) in September 2012.”

Opioids are taken for pleasure and pain relief and include heroin, hydrocodone, codeine, morphine and oxycodone. They block the body’s ability to feel pain and can become addictive.

A patient with opioid dependence feels they are not able to stop using opiates. Prolonged use can have harmful consequences such as liver problems, depressive mood and impairment of cognitive functioning.

The condition is estimated to affect around five million people in the US and around 20% of people suffering from opioid dependence receive treatment.

Treatment costs associated with opioid dependence in the US are approximately $55bn a year, according to the Institute of Addiction Medicine.

Zubsolv® is a combination of opioid and opioid-antagonist drugs, which include buprenorphine and naloxone formulations respectively. It works by easing withdrawal symptoms and blocking the effects of opioids.

The drug is available in tablet form in 1.4mg/0.36mg and 5.7mg/1.4mg doses. It is meant for sublingual administration and dissolves under the tongue in just a few minutes.

Clinical trials on the maintenance treatment for opioid dependence

Orexo observed positive results from Phase I clinical studies on Zubsolv® in 2011. Commercial formulation and dosage of Zubsolv® were determined during these trials.

“The drug works by easing the withdrawal symptoms blocking the high effects of opioids.”

Orexo conducted Phase III clinical trials on Zubsolv® to assess acceptance of the drug in comparison with Suboxone. This cross-over study was completed in November 2012. It enrolled 28 participants, which were administered with either Zubsolv® or Suboxone randomly on separate study days.

The study’s results showed that Zubsolv® was preferred by eight out of ten participants. The parameters for the acceptance included ease-of-administration, taste masking, after-taste experience and mouth-feel.

Orexo began a randomised, double blind and parallel assignment Phase III clinical study on Zubsolv® in June 2013. It enrolled 300 subjects with opioid dependence in the US.

Approval of the drug by the EMA was based on results obtained from a bioequivalence study, previous pharmacokinetic studies and data from Orexo’s clinical programme, which enrolled more than 1,000 patients.

The company develops new drugs using a combination of well-documented substances. It introduced Zubsolv® across the US markets in September 2013 in association with Publicis Touchpoint Solutions. The drug faced tough competition from Reckitt Benckiser Pharmaceuticals’ Suboxone, which made approximately $1.3bn worth of sales in 2011.

Orexo retains the patents for the technology relating to Zubsolv® in the US and international markets.

Orexo signed a license agreement in June 2016 granting Mundipharma exclusive rights to market the drug outside the US. Orexo received an upfront payment of €7m ($7.75) and will also receive milestone payments and the tiered royalties on future net sales, as part of the agreement.

Selincro (nalmefene) is an injected drug for the treatment of alcohol dependence.

Intermezzo is a formulation of zolpidem that is indicated for the treatment of insomnia or sleeping disorders.