The APAC region, led by China, accounts for over a third of all current CGT trials, with oncology and infectious disease running the highest number of trial sites across APAC, according to research from GlobalData. Cardiovascular, gastrointestinal, haematological, metabolic, CNS, genetic and respiratory disorders all had over 500 trial sites as of May 2022. 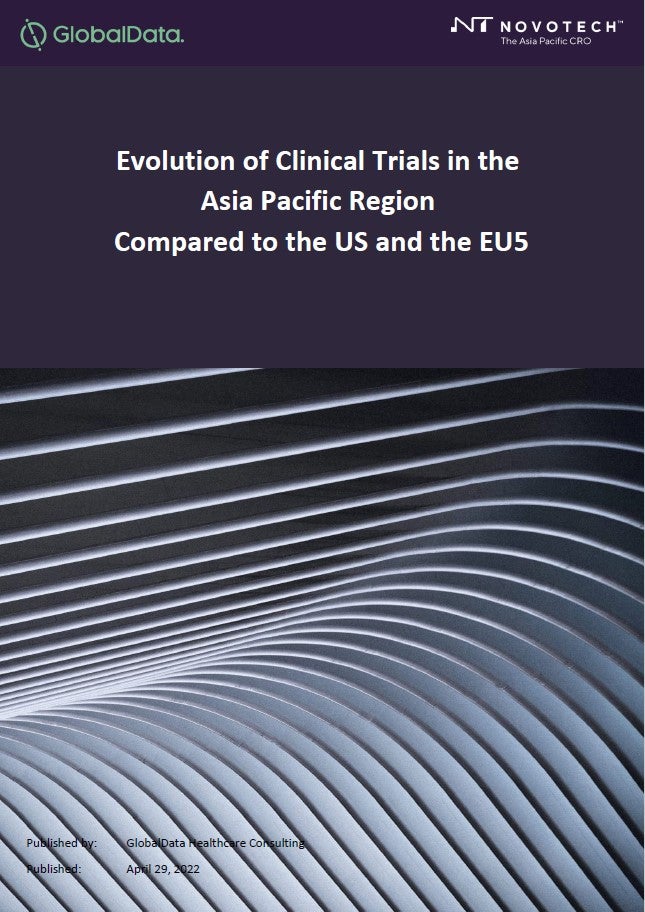 Thank you. Please check your email to download the Whitepaper.

According to Dr. Vivian Gu, vice president and chief medical officer at leading biotech specialist contract research organisation (CRO) Novotech, the activity of biotechs in China is increasing fast: “The increase in the number of trial counts from 2020 to 2021 indicates a healthy environment for conducting trials in China. A higher percentage of oncology trials in China [also] indicates a strong patient base available in the country.”

Key drivers for this increase include the Chinese state’s recent push for innovation with the launch of its “Made in China 2025” industrial strategy. Included were incentives for home-grown businesses to develop emerging technologies, including biotechnology, with estimates of biotech drug sales putting the Chinese biotech market at US$96bn by 2023.

Foreign sponsors are also making inroads. According to GlobalData, biotech trials initiated by China rose at a CAGR of 40% from 2016 to 2021, but trials initiated by Western biotechs rose at an impressive CAGR of 63% over the same period. “While still accounting for a modest portion of studies in China, Western sponsors’ trial activity is progressing faster than the overall market,” says Dr. Gu.

When the first chimeric antigen receptor T-cell therapy (CAR-T) gained approval in the US in 2017, CAR-T development was still concentrated in the United States. However, a sharp increase in CAR-T drugs developed by specialist Chinese biotechs meant that as of 2021 over 10% of new drugs developed in China are CAR-Ts, compared to 2% in the US. Between 2010 and 2014, GlobalData identified around 90 CAR-Ts in development, but by 2021 that number had increased to over 300 and China has now surpassed every region in its development of CAR-T cancer therapies.

Opportunities to work on the latest biotech developments, aided by government subsidies, has led to many highly skilled Chinese scientists trained in the West now returning to China to become key drivers of biotechs. The Chinese Government has also created Free Trade Zones (FTZs) aimed at promoting business development and encouraging foreign investment.

Added to this, an aging population is ensuring high demand for CAR-T cancer therapies. According to World Population Prospects 2019 (United Nations) by the year 2050, 1-in-6 people in the world will be over the age of 65, with China currently at 20% 65 years or over. Analysis by GlobalData shows in 2020 there were 4.5 million new cancer cases in China, accounting for 30% of all reported cancer cases worldwide.

The APAC region and China in particular feature high patient recruitment rates for CAR-T trials. Chinese enrolment periods are 25% shorter than comparable US rates, with the APAC region almost 40% shorter.

Strong interest from foreign sponsors to run trials in China centres on the high population, lower costs, the large pool of active trail investigators, and substantial local investment into healthcare from the state, up from US$3bn in 2017 to $8bn in 2018.

According to Dr. Gu, the Chinese government is also continuing to encourage biopharma innovation by aligning with the International Council for Harmonization of Technical Requirements for Pharmaceuticals for Human Use (ICH). More than 70% of ICH guidelines have now been implemented in China.

For Western companies wishing to include China in their clinical development strategy, Gu advises getting your product approved in China in parallel with or soon after the global initial approval. “Initiate trials in other Asia countries or regions with short start-up timelines, such as Australia,” Gu says. “When MRCT is not an option, Chinese local trials, to bridge the oversea pivotal trial, will be most likely needed to get your product approved in China.” A China standalone option is also possible, says Gu.

For more in-depth research and analysis into APAC’s impact on biotech, download the whitepaper below.