It is estimated that there are currently more than 7,000 orphan diseases, many of which are considered life-threatening and most of which have a genetic basis. Despite this high number, orphan diseases are rare by definition, affecting around one in 2,000 people as defined by the European Union.

In 2019, a client of Abacus Medicine Pharma Services gained a EU marketing authorisation for a speciality medicine developed to treat a rare genetic condition with a prevalence of 1 in 40,000. The company required a partner with established commercial and logistics networks within the EU, particularly in Denmark as they had already developed a Danish/Swedish dual pack. Find out how Abacus Medicine Pharma Services tailored a distribution and commercial support model to ensure the product was launched effectively into the Danish market by downloading now. 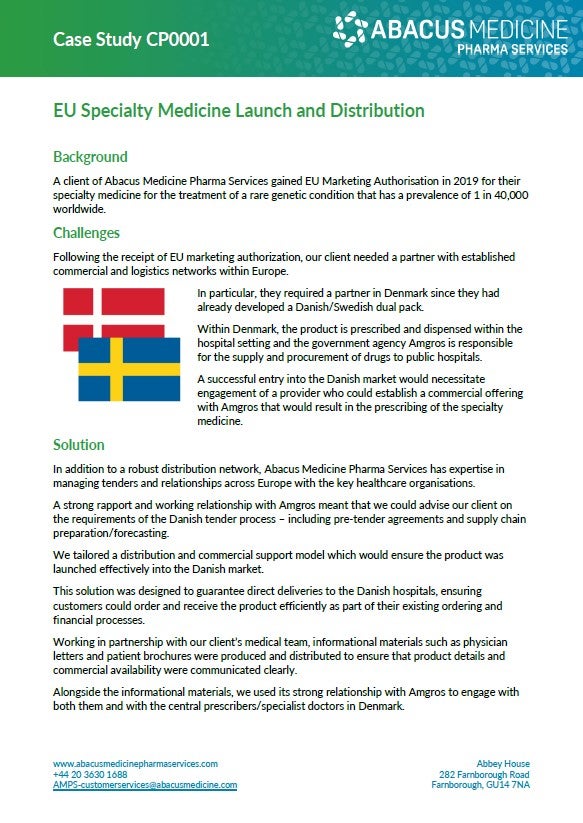 Thank you.Please check your email to download the Case Study.

Historically, the pharmaceutical industry has failed to meet the needs of this patient population. The commercial investment required to research and develop an innovative drug, prove its safety and efficacy, and bring it to market is staggering. Without a guaranteed return on investment (ROI), it is understandable why any for-profit company would show reluctance.

Efforts have been made to change this. Most famously, the US passed its Orphan Drug Act in 1983, providing innovators with financial motivation to develop orphan drugs and meet the needs of these forgotten patients. Centralised incentives are also in place across Europe, as well as at the national level in some EU states.

Such movements have enabled pharmaceutical companies to increase their focus on rare diseases, and the number of orphan drug launches is steadily increasing. According to one report, the orphan drug market is now growing at twice the speed of the non-orphan market, and a rise in the number of patients being diagnosed with rare diseases makes continued growth highly likely.

The choice of where to launch an orphan drug is an important and difficult decision. Due to the high price tags associated with these speciality medicines, innovators have naturally favoured big markets with high GDP such as the US and EU-5 (Germany, France, Spain, Italy, and the UK).

“It’s safe to positively correlate the industry trend of decreasing ROI to the diminishing rate of patient access for these critical therapies,” says Gary Kahn, Vice President of Business Development for Abacus Medicine Pharma Services. “The challenge of providing adequate access to the peripheral EU markets is quite evident. These countries will have a smaller patient pool due to population size and will likely carry a price tag that is significantly below that of higher GDP countries.”

But where does this leave patients outside of these preferred markets? Pharmaceutical companies clearly have a responsibility to balance revenue-optimisation against the potential to provide widespread patient access to life-changing therapies. This, believes Kahn, is where the role of healthcare systems is critical.

“Innovators need to remain motivated to develop pioneering therapies by having market conditions that allow them to capture their required ROI. I see the responsibility being a two-way street. Healthcare systems should provide an attractive environment for these innovators to launch their orphan drug assets, while innovators should focus on cost optimisation to ensure patient access is not jeopardised by profitability concerns.”

According to GlobalData, 2021 was a record year for orphan drug launches in Europe, with 12 medicines launched in Germany, 13 in both France and Italy, 14 in Spain, and 15 in the UK. Each country in Europe carries unique complexities, which makes it difficult for companies to deploy turnkey commercial strategies on a pan-European level. It’s imperative for orphan drug innovators to work with local market experts for each country, whether internal or through a local partner.

“Most innovators will look to the EU-5 as their first port of call when launching an orphan drug asset,” says Kahn. “However, I believe these innovators are leaving money on the table by not commercialising in some select, smaller markets – in particular, the Nordics (Denmark, Norway, Sweden, Finland) and BENELUX (Belgium, Netherlands, Luxembourg). When we took a sample of marketing authorisation (MA) holders with orphan drug assets in Europe, 55% and 69% chose not to launch their assets in the Nordics and BENELUX, respectively.”

The data also shows that between 7% to 11% of relative value to EU revenue is forfeited annually due to delayed investment decisions in these seven countries. The higher upfront investments associated with launching orphan assets in these territories are clearly a barrier to widespread patient access. According to Kahn, this results in a need for improved and optimised commercialisation solutions across the industry.

Launching an orphan drug in the Nordics and BENELUX

“Abacus Medicine is very well-established within Europe, with all the appropriate operating platforms, strategic relationships with wholesalers, pre-wholesalers, hospitals, and pharmacies, and all the required uploading systems,” explains Mark Ostle, Vice President of Strategic Partnerships for Abacus Medicine Pharma Services. “Many of these items could be entry barriers which prevent companies from entering the market.”

For small and medium-sized enterprises (SMEs) and first-time launchers who might lack the operational infrastructure and cash flow to launch an orphan drug in Europe, reducing these fixed costs means the innovator can launch in more territories and capture more revenue, all while improving patient access to critical therapies and increasing public health. “It’s a prosperous cycle that we contribute to, and I believe it’s something we can be very proud of,” adds Kahn.

The Commercial Partnerships division has been known to take innovative and unique approaches to the challenges of orphan drug launch. “We’ve developed some brand-new, innovative ways of accessing the market, using our and our clients’ assets in true synergy to make their products available in markets where they previously wouldn’t have been available” says Ostle. “Our pharmaceutical partners see us as an extension of their own businesses rather than a transactional partner.”

With low awareness and diagnosis methods being key problems in the rare disease community, Abacus Medicine Pharma Services is also focused on how it can help tackle this. In addition to speaking to key opinion leaders and physicians, the company has facilitated several pan-European events to boost awareness of orphan diseases and the therapies that can help treat them – a smaller yet vitally important part of the company’s overarching mission to improve patient access to critical, life-changing medicines.

In 2019, a client of Abacus Medicine Pharma Services gained a EU marketing authorisation for a speciality medicine developed to treat a rare genetic condition with a prevalence of 1 in 40,000. The company required a partner with established commercial and logistics networks within the EU, particularly in Denmark as they had already developed a Danish/Swedish dual pack. Find out how Abacus Medicine Pharma Services tailored a distribution and commercial support model to ensure the product was launched effectively into the Danish market by downloading now.