A collaborative, harmonised framework for improving access to medicines across European Union (EU) countries has long been the dream in the European Parliament. However, now that the implementation of Regulation (EU) 2021/2282 on health technology assessment (HTA) is a reality, a constructive discussion between the industry and regulators is needed. 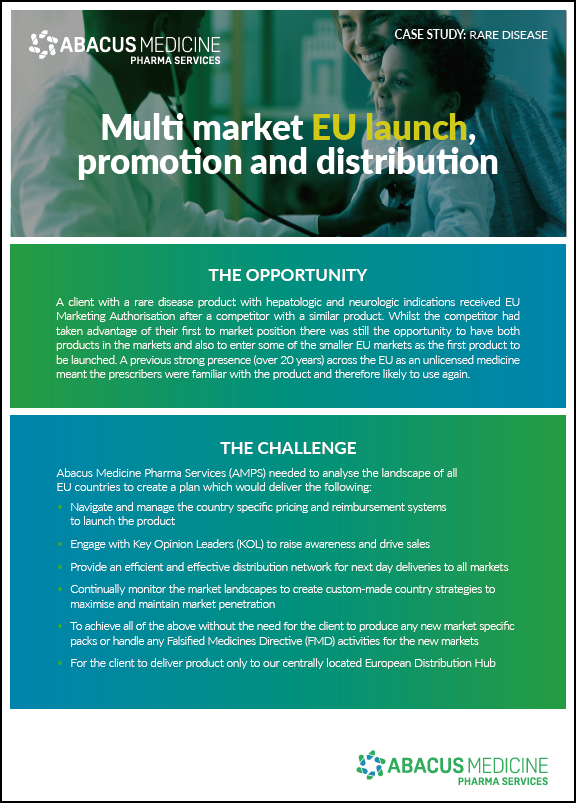 Thank you.Please check your email to download the Case Study.

The EUnetHTA aims to achieve a high level of health protection for patients and establish a framework to support member state cooperation on the clinical assessment of health technologies. As part of the new procedure, joint scientific consultations can be held with the appointed assessors of the new technology, where advice can be given relating to clinical trial design or comparator choice.

JCA reports will not give statements that may imply and predetermine national reimbursement decisions and will not have a legally binding effect, meaning national HTA bodies are welcome to draw their own conclusions on the clinical added value of the new medicine. As part of the decision-making process, they may request further evidence.

The new joint procedure will launch in Q1 2025 for oncology medicines and other advanced therapy medicinal products and extend to orphan drugs in 2028. By 2030, JCAs will be carried out on all medicinal products with an EMA-issued MA.

As pharmaceutical companies launch their products across European countries, the joint procedure is intended to reduce the duplication of submissions with different evidence requirements and procedural times required at a country level, and thus streamline workflows and reduce administrative burden. With the implementation of this new regulation, the JCA aims to reduce the time to medicines access across EU member states and to ease the reimbursement process in markets with no (or scarce) pricing and reimbursement infrastructure.

At last month’s WODC-EU, a policy advisor for the German Ministry of Health was of this opinion. Speaking at a plenary session about the EUnetHTA, they thought the implementation could be particularly valuable for countries with less established HTA infrastructure and expertise. Beyond that, they thought the collaboration could lead to mutual learning that could drive positive changes across the continent.

At the same session, a board member of HAS (Haute Autorité de Santé, the French HTA agency) noted the regulation’s ability to standardise access landscapes across Europe. Historically, disparities have resulted in varying timelines for gaining access to different EU markets, though this has also depended on the launch sequencing programmes used by MA holders. Nevertheless, a more harmonised pathway to launching drugs in Europe is expected to be the initiative’s major advantage.

In addition, the HAS board member believed the JCAs could speed up the reimbursement process since MA holders will be able to submit the EUnetHTA application before receiving the opinion of the Committee for Medicinal Products for Human Use (CHMP).

The head of orphan medicines at the EMA concurred that the standardised processes will ease the pricing and reimbursement (P&R) negotiations at the national level.

Panellists agreed that much remains to be determined in terms of methodologies. The EMA representative shared that the EMA and EUnetHTA group are currently performing an in-depth historical review of previously authorised drugs to understand which assessment methodologies could be most suitable in the JCA.

Another panellist – the head of pipeline and portfolio at Takeda – emphasised the importance of early scientific consultations, which would enable MA holders to align with the coordination group on evidence requirements as soon as possible. With standards of care differing across Europe, they were concerned about the comparators that EUnetHTA will choose and argued that the consortium must be pragmatic when selecting an appropriate comparator.

Likely implications for the industry

In a separate session, opinion leaned on the negative side as speakers representing the pharmaceutical industry explored the likely implications of the joint procedure.

A Spanish ex-payer who currently advises companies on pricing and market access saw little benefit in the unified process since he believed it will lead to work duplication due to the different statutory healthcare schemes and healthcare and pricing policies across Europe. He believed that EUnetHTA’s conclusions will most likely influence the pricing and reimbursement decision of the drug at the national level. However, he did point out that the joint assessment could be a useful way of narrowing down typically broad EMA label content to specific patient populations.

A German expert in healthcare strategy and market access with over 35 years in the pharma industry agreed. He also mentioned that if the G-BA (Gemeinsamer undesausschuss, the German HTA body) inputs, and inputs from other well-established HTA bodies from other member states, are not included in the JCA methodology, then a second assessment will most likely be required at the national level. This would worsen duplicate work problems.

It wasn’t all negative, however. The German expert did suggest that the JCA procedure may reduce the time-to-market, which could be further improved for orphan drugs if Germany’s non-quantifiable benefit system were to be incorporated into the JCA.

A Czech expert in orphan drug commercialisation in central and Eastern Europe with more than 25 years of pharma experience added that the joint procedure’s value would be strongest for Eastern European countries, which lack the HTA infrastructure to perform their own evaluations and often base their reimbursement decisions on those published by other HTA bodies, e.g., HAS, G-BA, NICE (the National Institute for Health and Care Excellence, the HTA body from the UK). The joint EU HTA procedure could make drug launches easier and thus more attractive in these countries.

During other WODC-EU sessions, the need for pragmatism in the joint procedure came up again. A former NICE employee currently working for Novartis mentioned that there must be an open discussion about the type of evidence that will most likely be required for submissions, especially for those drugs where head-to-head or randomised controlled trials are not feasible. Currently, there are still some concerns regarding the type of indirect treatment comparisons used in the assessment.

The speaker was also concerned that EUnetHTA will ask manufacturers for a multitude of PICOs (Patient, Intervention, Comparator, Outcomes) to form a framework for a joint assessment that covers individual PICO questions from all EUnetHTA partners. To avoid this, they emphasised the importance of using pragmatic PICOs focused on acceptable, rather than ideal, evidence.

Another concern came from an audience member who worried that the voices of national patient group organisations will be left outside the JCA scoping meeting, which could impact the launch and implementation of new medicines.

An added layer of complexity?

According to Cristina Freire Sanz, market access manager at Abacus Medicine Pharma Services, European alignment on the methodology and evidence requirements for the joint HTA procedure is still needed since nowadays is an amalgamation of the current national HTA processes. As it is today, the implementation of the European HTA regulation may not fulfil its purpose of harmonising the HTA process, reducing the duplication of submissions, and accelerating medicines access across member states. Contrarily it may lead to duplication of work and administrative burden, especially for small and mid-size pharma companies with limited resources.

“Because the content of the JCA report is not legally binding, it will be up to the member state whether or not to accept it for national appraisals and reimbursement decisions,” Sanz comments. “We believe national HTA bodies from countries with long HTA traditions, like Germany or France, are likely to request further evidence and different types of analysis if the JCA does not include the same methodology they use to assess the drug’s added clinical value.”

“Another important point is that countries in the forefront of this regulation will set up the standards, which may be translated into more evidence requirements for other markets,” she adds. “As a last remark, we believe that the implementation of the European HTA regulation will be only successful if both the payers and the pharma sector are willing to make the necessary compromises.”

Ultimately, Abacus Medicine Pharma Services shares the general opinion of the industry that the joint procedure could cause more problems than it solves. The big risk, of course, is that an added layer of difficulty to an already complex market access and P&R landscape could make Europe a less attractive region for pharmaceutical companies to launch their drugs in, impacting patients in critical need of new treatment options. Nevertheless, Abacus Medicine Pharma Services will continue to help manufacturers navigate this constantly changing environment with bespoke services executed in true partnership.