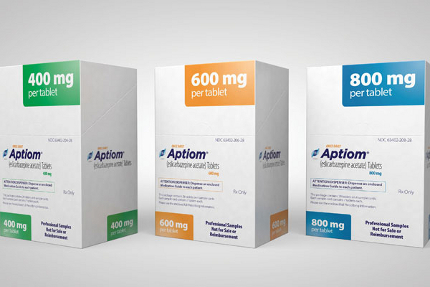 Aptiom® (eslicarbazepine acetate) is a sodium channel inhibitor approved as adjunctive treatment of partial-onset seizures in the US and Europe (marketed under the brand name Zebinix®). The drug was discovered and developed by BIAL. Sunovion Pharmaceuticals Inc. acquired from BIAL the development and commercial rights to the drug in the US and Canada.

Sunovion received approval from the US Food and Drug Administration (FDA) for the use of Aptiom® as adjunctive treatment of partial-onset seizures in November 2013. Studies of Aptiom® in conversion to monotherapy for partial-onset seizures have been completed and were presented at the American Epilepsy Society (AES) 2013 annual meeting; the company intends to file a supplemental new drug application in spring 2014.

The European Commission (EC) approved Zebinix® as adjunctive therapy for treatment of partial-onset seizures with or without secondary generalisation in April 2009.

Trobalt (ezogabine / retigabine) is indicated for the treatment of partial-onset epileptic seizures in patients aged more than 18 years old.

Seizures are a result of sudden, abnormal electrical activity in the brain. They typically last for a few seconds to a few minutes. The impulsive nature of seizures can have a significant impact on people with epilepsy. Partial seizures begin in one part of the brain (and may then spread to other parts, or generalise, to the entire brain) and are the most common type of seizure, affecting about 60% of people with epilepsy.

Partial seizures can be further classified as simple (which do not impair consciousness and may involve changes in mood or strange sensations), complex (with loss of consciousness and typically involving repetitive movements like blinking or twitching) or partial with secondary generalization (seizures that start out as simple or complex and progress to involve both sides of the brain, with stiffening and jerking of the entire body).

Reduction of the frequency of seizures can significantly minimise the burden of epilepsy.

Aptiom® is metabolised to a blocker of voltage-gated sodium channels that is presumed to work by stopping rapid repetitive neuronal firing and, thus, resulting in the reduction of seizure activity.

A maximum dose of 1,200mg daily should only be initiated after the patient has tolerated 800mg daily for at least a week.

The three studies demonstrated that the patients who were treated with Aptiom® showed improvements in standardised seizure frequency for 800mg and 1,200mg once daily dosages when compared to placebo. The patients administered Aptiom® 800mg and 1,200mg doses showed responder rates of 32% and 41% respectively in comparison with placebo-administered patients whose responder rate was 22% (a responder is a patient who reduces seizure rates by at least 50%).

"The three studies demonstrated that the patients who were treated with Aptiom® showed improvements in standardised seizure frequency for 800mg and 1,200mg once daily dosages when compared to placebo."

Sunovion also obtained positive results for two phase III clinical trials (named 093-046 and 093-045) which were conducted on Aptiom® as monotherapy treatment for partial-onset seizures. The two clinical trials were double blind, multicentre, historical controlled studies designed identically. These study findings have not been reviewed by FDA, and Aptiom® currently is not approved for monotherapy.

The 093-046 study evaluated Aptiom® as monotherapy by enrolling 172 patients across 41 centres in five counties. About 25% of the patients evaluated in the study were from the US. The 093-045 study enrolled 193 patients across 67 centres in North America. It was the first historically controlled epilepsy monotherapy study in North America. The patients enrolled were above 16 years of age and were administered with 2:1 ratio of Aptiom® 1,600mg or Aptiom® 1,200mg once daily doses in both the studies. Both the studies met the primary end points.

Aptiom® was well tolerated in both the clinical studies. The most common treatment-emergent adverse events found were dizziness, somnolence, headache, fatigue, nausea, and nasopharyngitis.

Aptiom® is planned to be launched in the US in the second quarter of 2014. Eisai entered into an agreement with BIAL in February 2009 for the co-promotion of the drug under the trade name Zebinix® in Europe.

Other medications available in the market for partial-onset seizures include Potiga (marketed under the brand name Trobalt in Europe) developed by Valeant Pharmaceuticals and GlaxoSmithKline, and Sabril manufactured by Lundbeck.