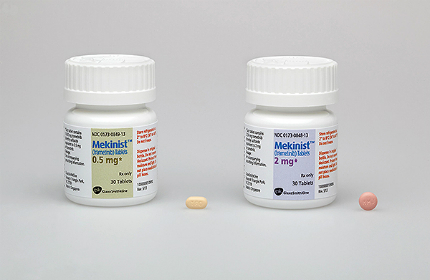 Mekinist (trametinib) is a mitogen-activated protein kinase (MEK) inhibitor, indicated for the treatment of unresectable or metastatic melanoma in adult patients. The drug is developed and marketed by GlaxoSmithKline (GSK).

GSK retains all rights to develop, manufacture and commercialise the drug worldwide expect in Japan where Japan Tobacco holds the co-promotion rights of the drug.

Melanoma is a fast growing cancer that originates in melanocytes, which are responsible for making the skin colour. It is the most dangerous and fatal form of skin cancer that initially emanates as a single tumour and spreads to the entire body.

When the disease spreads to other parts of the body, it is known as advanced or metastatic melanoma.

Melanoma will result in about 9,480 deaths across the US in 2013, according to the National Cancer Institute’s estimates. It is also found that about half of the metastatic melanoma patients have a BRAF gene mutation, which enables melanoma tumours to grow and spread in the body.

Mekinist contains trametinib, which comprises of an MEK inhibitor drug. The drug stops the MEK1 and MEK2 kinase activity which promotes the cellular proliferation. It also activates BRAF pathway and inhibits the melanoma cell growth. The drug is available in 0.5mg and 2mg dosed tablets for oral administration.

"Mekinist contains trametinib, which comprises of an MEK inhibitor drug. The drug stops the MEK1 and MEK2 kinase activity."

The FDA and EMA approvals for Mekinist were based on the results obtained from an open label Phase III clinic trial known as METRIC study. The study was conducted between November 2010 and March 2013, in 112 locations across the world. It was a randomised and international study which enrolled 322 metastatic melanoma adult patients with BRAF V600E or V600K mutation.

The patients selected were above 18 years of age and previously treated with no more than one chemotherapy regimen.

Patients were administered with Mekinist or chemotherapy in a 2:1 ratio, respectively. The primary outcome measure of the study was progression-free survival (PFS). The secondary outcome measures included PFS and overall survival (OS) in all patients, and the duration of response.

The MEK protein inhibitor was discovered by Japan Tobacco and in-licensed by GSK in 2006.

"Median PFS in Mekinist administered patients was 4.8 months, while it was 1.5 months in the chemotherapy group."

Japan Tobacco retains the co-promotion rights of Mekinist in Japan.

GSK entered into an agreement with bioMérieux to co-develop Mekinist, in 2010. bioMérieux provided assistance in the clinical diagnostic tests to detect BRAF V600 gene mutations with its FDA-approved THxID™-BRAF tests.

Other medications approved for the treatment of metastatic melanoma include Yervoy (Ipilimumab), developed by Bristol-Myers Squibb, and Zelboraf (vemurafenib) which is manufactured by Plexxikon and Roche.

Tafinlar (dabrafenib) is a single-agent oral treatment indicated for the treatment of unresectable or metastatic melanoma in adult patients.