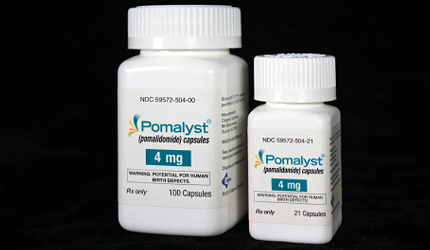 Pomalyst (pomalidomide) is an anti-angiogenic drug developed by Celgene Corporation for the treatment of multiple myeloma in patients who have received two prior therapies.

In February 2013, pomalyst received approval from the US Food and Drug Administration (FDA) for the treatment of patients with multiple myeloma.

The drug was approved by the European Commission (EC) for the treatment of relapsed and refractory multiple myeloma (rrMM) patients in August 2013.

The drug is planned to be launched under the brand name IMNOVID in Europe.

Multiple myeloma, a type of cancer

Multiple myeloma is a type of cancer that occurs when malignant plasma cells grow out of control in the bone marrow. The disease also results in the forming of tumours in bones, which makes it difficult for bone marrow to produce healthy blood cells and platelets.

The disease mainly affects older adults. According to the American Cancer Society’s estimates, about 22,350 new cases of the disease will be diagnosed in the US, of which about 10,710 are expected to be fatal, in 2013.

Pomalyst contains an anti-angiogenic drug that works by restraining the growth of myeloma cells. The drug also contributes to anti-angiogenic and anti-myeloma activities. The drug is available in capsules form with 4mg doses for oral administration.

"Pomalyst contains an anti-angiogenic drug that works by restraining the growth of myeloma cells."

Celgene conducted Phase I clinical trials on Pomalyst between August 2011 and October 2011. It was a randomised, double blind, placebo controlled and parallel assignment. The study enrolled 33 patients in the US and evaluated the safety, efficacy, tolerability and pharmacokinetics of pomalyst.

Celgene initiated a Phase I/II clinical trial on pomalyst in November 2011. It is an open label, randomised and single group assignment. It enrolled more than 82 patients and will evaluate pomalyst in combination with high dose Dexamethasone and oral cyclophosphamide. The final results of the study are expected to be known by October 2013.

"Multiple myeloma is a type of cancer that occurs when malignant plasma cells grow out of control in the bone marrow."

The FDA approval for the drug was based on the results from a Phase II clinical trial known as CC-4047-MM-002 study. It was a randomised, open label, multicentre study which enrolled 221 patients with relapsed and refractory multiple myeloma and previously treated with lenalidomide and bortezomib therapies. The treatment arms of the study included pomalidomide alone or pomalidomide plus low-dose dexamethasone.

Celgene initiated a Phase III clinical trial (MM-003) on pomalyst in March 2011. It was an open label, randomised, multicentre and parallel assignment.

The study enrolled more than 455 patients across 93 study locations in the US, Australia, Belgium and Canada.

The primary outcome measure of the study included finding time to disease progression or death in five years.

The secondary outcome measures included finding adverse events in two years and the number of patients alive or dead in five years. The EC’s approval was based on the Phase III study.

Celgene Corporation holds the marketing rights of pomalyst in the US. The drug faces competition in the market from Kyprolis (carfilzomib), a similar drug marketed by Onyx Pharmaceuticals and approved by the FDA for the same indication.

Kyprolis (carfilzomib), developed and manufactured by Onyx Pharmaceuticals, is a proteasome inhibitor indicated for the treatment of the patients with multiple myeloma.

Zometa is a bone resorption inhibitor indicated for the treatment of bone complications in patients with advanced cancer.